It’s been a big couple days for the Mazda MX-5 Cup series, one of the more entertaining sports car series in the U.S.

The 2015 season will consist of six weekends supporting the TUDOR United SportsCar Championship, Verizon IndyCar Series, and the NASCAR XFINITY Series. All weekends will be doubleheaders. 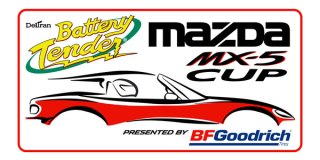 Additionally, the company also announced that the new, just revealed, 2016 Mazda MX-5 Miata will be raced in a new Global Cup series, in North America, Europe and Asia.

Starting in 2016, there will be multiple Mazda Global MX-5 Cup series around the world, all using identically-prepared cars. Full details of the Global MX-5 Cup, including which countries will be involved and when the races will take place, will be announced as they are confirmed. The Global MX-5 Cup will culminate at the end of 2016 with a Global Shootout at Mazda Raceway Laguna Seca in Monterey, California, to crown the series champion. Among other prizes, the series champion will receive a one-day test in Mazda’s top-level TUDOR United States SportsCar Championship SKYACTIV prototype race car.

“Since the first Mazda MX-5 Miata took the green flag back in 1990, the car has been the ideal platform for both veterans and rookies alike,” John Doonan, director of motorsports for Mazda North American operations, said. “Because the MX-5 is inherently such a good car to drive, it is an ideal platform to learn basic and advanced racecraft, and this has made the professional MX-5 Cup series very successful to date.”