One wonders if Budweiser, Jimmy John’s, and Outback Steakhouse are set to provide Kevin Harvick with a nice Christmas bonus.

Those major companies backed Harvick as he charged to the 2014 NASCAR Sprint Cup Series championship, and with Harvick being among the fastest drivers week in and week out, he got lots of television airtime for himself and his stable of sponsors.

Gordon, whose bid for a fifth Cup title ended in the Eliminator Round, led all drivers in total interview time on TV with one hour, 33 seconds’ worth of mic work. Dale Earnhardt Jr., knocked out of the Chase in the Contender Round, was second in that category (56 minutes, 32 seconds), and Harvick was third (53 minutes, 12 seconds).

Surprise Championship 4 contenders Denny Hamlin and Ryan Newman are listed eighth and 14th respectively in TV mentions. Newman himself is next-to-last among the Top 20 in interview time with his 13 minutes, 31 seconds, which only beat Marcos Ambrose (10 minutes, 50 seconds).

Considering Ambrose has gone back home to Australia and V8 Supercars, we figure he doesn’t care much about this.

Here’s how the year-end data looks… 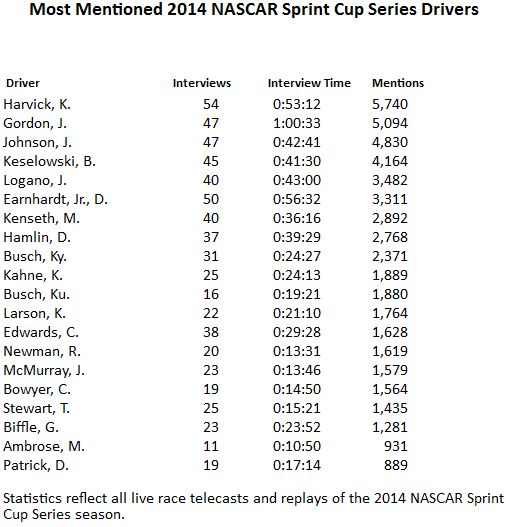