ST. PETERSBURG – Will Power has led another Team Penske 1-2-3 sweep of practice for this weekend’s Firestone Grand Prix of St. Petersburg, in the third and final practice session before qualifying later on Saturday afternoon.

Power’s best lap of 1:01.3621 in the No. 1 Verizon Team Penske Chevrolet was quicker than he went on Friday, and led teammates Simon Pagenaud and Helio Castroneves overall.

The 2014 polesitter, Takuma Sato, was top Honda in fourth in the No. 14 ABC Supply Co. entry at 1:01.5119, with the fourth Team Penske entry driven by Juan Pablo Montoya in fifth.

The 12 Chevrolet runners occupied 12 of the top 18 positions, with only six Hondas mixed in there and the remaining six in the back.

Red flags occurred for Sebastien Bourdais and Tony Kanaan, both with off-track excursions, but neither with any damage to their respective No. 11 Hydroxycut KVSH Racing Chevrolet and No. 10 NTT Data Chip Ganassi Racing Chevrolet cars.

Here are practice three times below. Qualifying for the IndyCar race occurs at 4:10 p.m. ET and local time. 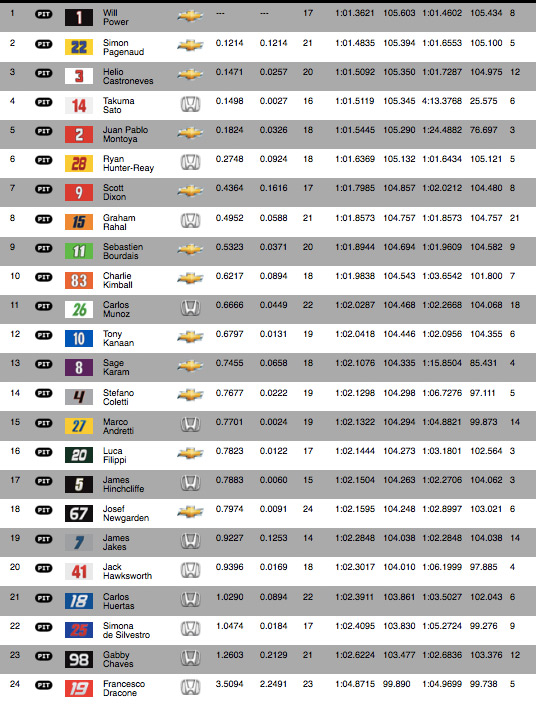