AVONDALE, La. – Tony Kanaan has led the opening 90-minute practice session for the inaugural Indy Grand Prix of Louisiana (Sunday, 2:30 p.m. ET, NBCSN), in an incident-filled and a Chevrolet-routed session.

What are usually the pair of red Ganassi cars are primarily blue this weekend, Dixon’s car shifting from its usual Target red for its first partner livery of the season. This unofficially marks the first race since 1989 there is not a Target-sponsored Ganassi car in the race.

Until the final minute, 12 of the top 13 runners were Chevrolets, including a top-10 sweep by Chevrolet. Dale Coyne Racing’s Carlos Huertas in 11th was the top Honda runner until the final laps.

However, late fliers from James Hinchcliffe and Gabby Chaves to end eighth and ninth interrupted the Chevrolet dominance. Hinchcliffe, in the No. 5 Arrow/Lucas Oil Schmidt Peterson Honda, was 0.6011 of a second off Kanaan’s best time in eighth overall.

Stefano Coletti also had a wild ride through the gravel exiting Turn 6 but survived without any further damage. 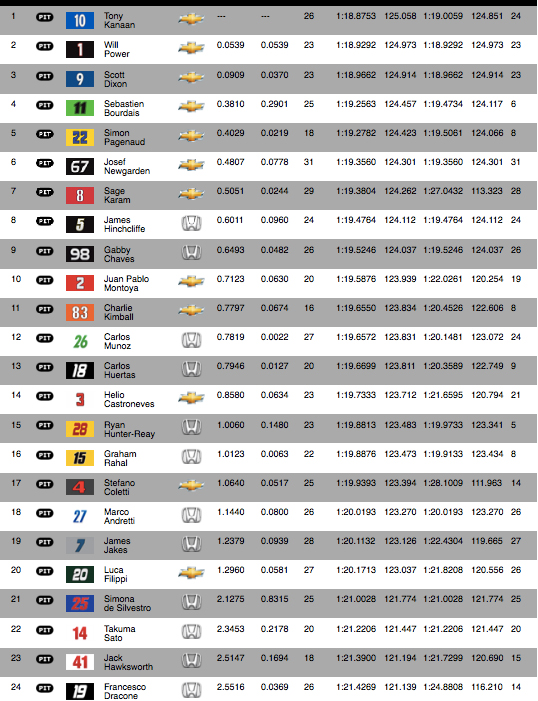