AVONDALE, La. – Scott Dixon took the No. 9 Brita Chip Ganassi Racing Chevrolet to the top of the timesheets in the third practice for the Verizon IndyCar Series’ Indy Grand Prix of Louisiana, a 45-minute session ahead of qualifying later Saturday afternoon (LIVE qualifying is at 5 p.m. ET, 4 p.m. CT and local time, on NBCSN and NBC Sports Live Extra).

Dixon set what is thus far the fastest time of the weekend, a 1:18.5538, to go more than three tenths quicker than Tony Kanaan’s best lap on Friday of 1:18.8753. All of the top eight runners, down to Kanaan in eighth, eclipsed Kanaan’s best time from yesterday.

Simon Pagenaud leapt up to second near the end of the session in the No. 22 Penske Truck Rental Chevrolet, at 1:18.6119.

Defending series champion Will Power sandwiched them in fourth the No. 1 Verizon Team Penske Chevrolet at 1:18.7246.

With Chaves in third and Carlos Munoz in sixth, Hondas made inroads into the top runners for the first time this season.

The session ended under a red flag for a spin by James Hinchcliffe exiting Turn 5, which marked his second spin at that corner this weekend.

The next on-track session for the Verizon IndyCar Series at the inaugural Indy Grand Prix of Louisiana is qualifying, which begins at 4:15 p.m. CT and local time. Qualifying is LIVE on NBCSN and NBC Sports Live Extra starting at 4 p.m. CT, and 5 p.m. ET.

Times from practice three are below: 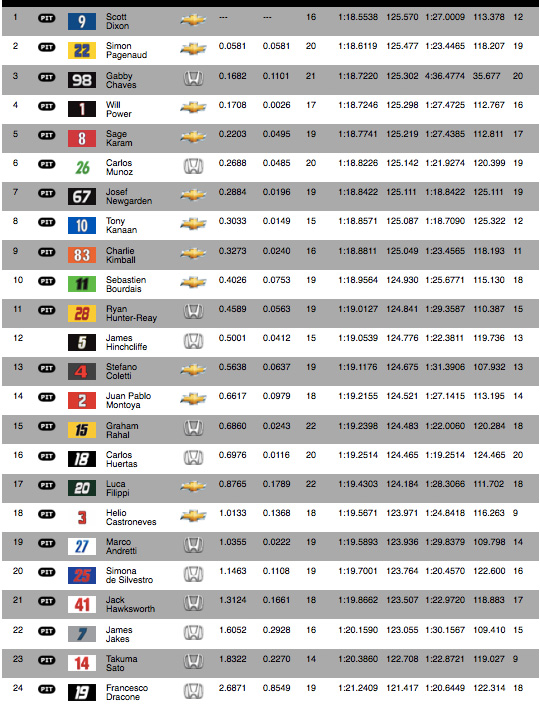