A 12-car field isn’t exactly what the doctor ordered for Indy Lights’ second marquee event of the year, beyond the Freedom 100, but there’s still one key storyline heading into Long Beach: Carlin vs. the world.

Trevor Carlin’s squad left no doubt of its ability after a dominant double win on American debut in St. Petersburg, with Ed Jones winning both races flag-to-flag from pole. At St. Petersburg, they were welcomed with open arms. However, the rest of the field will be shooting for both Jones and Max Chilton, who have a clear target on their back this weekend.

This is a big weekend for American rookie Spencer Pigot, a Mazda Road to Indy veteran who will finally have the chance to make his Long Beach track debut with Juncos Racing. Pigot spent four years combined in USF2000 and Pro Mazda, but neither championship saw the Team USA Scholarship winner compete at what is essentially the MRTI home track – Mazda headquarters are based in nearby Irvine, and Team USA Scholarship founder Jeremy Shaw is a longtime California resident. Pigot’s a Floridian but no doubt appreciates the magnitude of Long Beach, and either he or teammate Kyle Kaiser would be keen to win this weekend.

The final four in the field – Andretti Autosport’s Matthew Brabham and Shelby Blackstock, and Belardi Auto Racing’s Felix Serralles and Juan Piedrahita – enter as relative underdogs, although Brabham will no doubt be keen to improve upon a tough St. Pete weekend in another one-off appearance.

The TUDOR Championship heads to the streets of Long Beach for the second time, but the 10th time overall based on predecessor history. GRAND-AM ran for one year in 2006 before the first ALMS race occurred there in 2007, and ran until 2013.

Noteworthy here is the No. 01 Chip Ganassi Racing entry going for its third consecutive win at Long Beach, albeit spread over that 10-year period. Scott Pruett won with Luis Diaz in 2006, and with Memo Rojas last year; he’ll have a chance to make it a three-peat with fellow Californian Joey Hand in the No. 01 Chip Ganassi Racing Riley-Ford on Saturday.

Elsewhere Action Express Racing has finished every lap thus far in TUDOR Championship competition since the series’ inception at the 2014 Rolex 24; that’s now north of 10,000 miles in an impressive achievement. Christian Fittipaldi and Joao Barbosa always pack a punch in the No. 5 Action Express Racing Corvette DP.

The Taylor brothers will also be ones to watch, while both the No. 60 Michael Shank Racing Ligier JS P2 Honda and DeltaWing will make their track debuts. The latter car has Rojas and Katherine Legge on board; Legge won her first U.S. race in 2005 at Long Beach in Formula Atlantic.

Besides the nine Prototypes, eight GT Le Mans cars make up the balance of the field. A pre-race BoP change may negate Corvette Racing’s fuel strategy advantage achieved at Sebring; nonetheless, Corvette always finds a way to persevere. Meanwhile Porsche, Ferrari and BMW look to break up the reign of dominance from Jan Magnussen and Antonio Garcia, who have won the opening two races in their No. 3 Corvette C7.R. 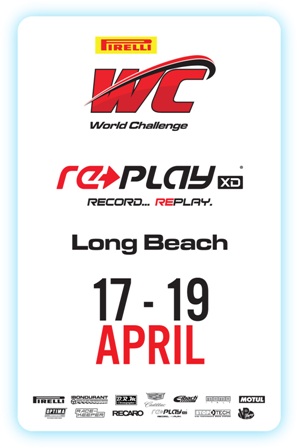 With no less than 40 cars expected, Pirelli World Challenge packs a veritable smorgasbord of FIA GT3-spec car awesomeness in Sunday afternoon’s “Roar by the Shore” presented by Replay xd.

GT Cup presented by MOMO thus far has also seen one driver win three races, in the form of Colin Thompson. Sloan Urry and Lorenzo Trefethen have also been close to winning, with Phil Fogg Jr. adding the other win this year.

More important for PWC even more than showcasing its diversity of machinery is keeping their single race clean. Cautions dominated the afternoon both Saturday and Sunday in St. Petersburg, with more than half of the 100 minutes of racing under yellow flag conditions there due to accidents. If even 40 of 50 minutes are green at Long Beach, that will be deemed a success.