LONG BEACH, Calif. – Will Power returned Team Penske to the top of the pylon Friday in the second 45-minute practice for the Verizon IndyCar Series’ Toyota Grand Prix of Long Beach.

Power, in the No. 1 Verizon Team Penske Chevrolet, set a best time of 1:07.5485, ahead of teammates Simon Pagenaud and Helio Castroneves.

Scott Dixon, Juan Pablo Montoya and Josef Newgarden made it a Chevrolet top six sweep of the session, incidentally coming in the first session without the “rabbit ears” aero parts removed from the front wing on the Chevrolet aero kit, as assigned by INDYCAR.

Graham Rahal was the fastest Honda in seventh, 0.5809 off Power’s best time.

The session featured one incident, when Rocky Moran Jr. and Carlos Munoz collided in Turn 1. It appeared as though Moran didn’t see Munoz, and it sent the pair into a synchronized spin. Munoz recovered while Moran Jr. was done on the spot.

Third practice runs from 10 to 10:45 a.m. PT and local time on Saturday morning.

Times from free practice two are below. 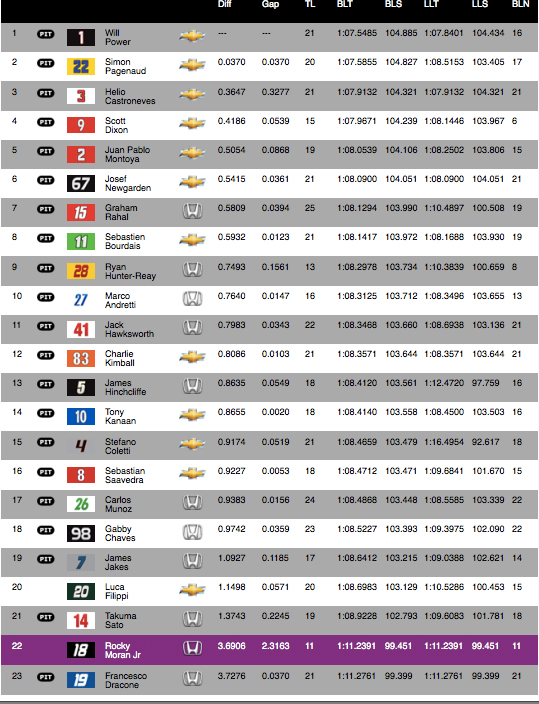