Sebastien Bourdais dominated the top spot in the first practice session and for the first half of the second, but it was Scott Dixon who claimed P1 in the second practice for the Angie’s List Grand Prix of Indianapolis.

Graham Rahal was the fastest of the Honda powered drivers, finishing the session in seventh at 1:11.1422

The session was red flagged for  nine minutes and 53 seconds.

It was stopped early on after Will Power spun out and into the grass.

With about 27 minutes left in the session, Juan Pablo Montoya and Stefano Coletti collided with each other while entering Turn 1. Coletti had his left-front wing clipped off in the incident. 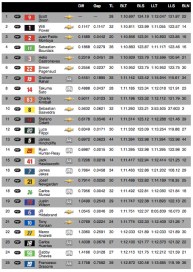