Three of Chip Ganassi Racing’s five drivers, Sage Karam, Scott Dixon and Tony Kanaan were 1-2-3 in Monday’s practice for this year’s Indianapolis 500, all over 225 mph.

Dixon and Kanaan were 1-2 before Karam got a tow right near the end of the session to eclipse them both with the day’s fastest lap speed of 225.802 in the No. 8 Comfort Revolution/Big Machine Chip Ganassi Racing Chevrolet.

The 2013 Indy Lights champion was ninth in his Verizon IndyCar Series debut this race last year. He returns to the cockpit after missing the Angie’s List Grand Prix of Indianapolis, with Sebastian Saavedra in the No. 8 car.

Beyond the Ganassi trio, Marco Andretti also ended the day over 225 at 225.184 in fourth. CFH Racing’s pair of JR Hildeband and Ed Carpenter were next up.

The top 27 cars did a reasonable amount of running (from as few as 6 laps up to 83 for Josef Newgarden), but there were some notable exceptions.

Team Penske’s trio of Juan Pablo Montoya, Will Power and Helio Castroneves ran installation laps only. Simon Pagenaud served as the team’s guinea pig and banked 31 laps, with a best speed of 222.885 mph.

The four cars entered that didn’t turn any laps today were Jack Hawksworth and Alex Tagliani, in the Nos. 41 and 48 A.J. Foyt Enterprises Hondas, 1996 champion Buddy Lazier in the No. 91 Lazier Racing Partners Chevrolet, and the as-yet-to-be-determined No. 19 Dale Coyne Racing Honda.

Here are the speeds: 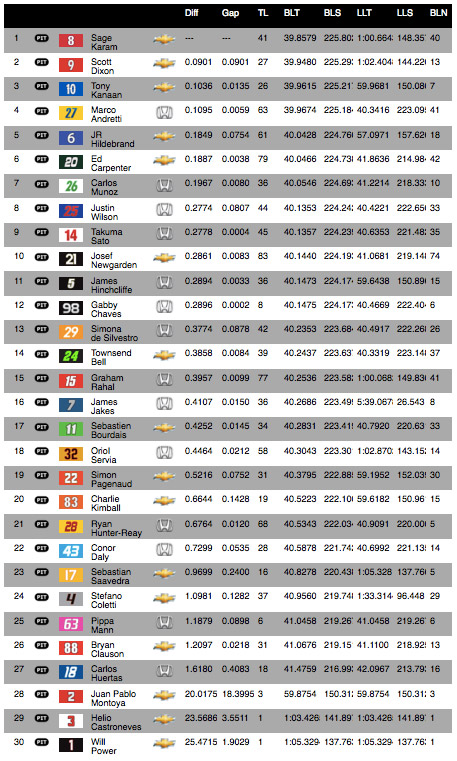