Helio Castroneves led both the overall and non-tow speed charts during Tuesday’s practice session for the 99th Indianapolis 500.

The driver of the No. 3 Verizon/Shell Team Penske Chevrolet posted a 227.514 mph to lead the overall speed charts, and along with teammate Simon Pagenaud (227.382), the two were the first into the 227 mph bracket this month.

Wilson’s day ended early and capped off a tough day for Honda-powered cars at the Speedway.

Near the end of the session, the popular Englishman pulled off entering Turn 1 with plumes of smoke out the back of his No. 25 Andretti Autosport Honda.

It was the third mechanical related issue of the day for Honda. James Jakes also had smoke out the rear of his No. 7 Mediatech Advertising Honda (see below) and, most dramatically, a fuel leak caused an inferno for Andretti’s fifth driver this month, Simona de Silvestro in the No. 29 TE Connectivity Honda.

Per Indianapolis Star reporter Curt Cavin, Wilson’s was nearing a change while Jakes’ was relatively new.

Honda blown engine update: Jakes' was relatively new; @justin_wilson engine was due to be replaced. #IndyCar

A total of 34 driver/car combinations took time, with the only driver not to go out the 1996 Indianapolis 500 champion Buddy Lazier, who is expected to be on a short engine program (reduced mileage) in his No. 91 Lazier Racing Partners Chevrolet.

Of the 34, Marco Andretti ran in both his No. 27 Snapple Honda and Carlos Munoz’s No. 26 Cinsay/AndrettiTV.com Honda (the latter for four laps), while Dale Coyne Racing’s No. 19 Honda got its first running of the month with James Davison.

Davison is not confirmed yet for the remainder of the month, but is the likeliest candidate to continue behind the wheel even despite a conflict next weekend in Canada where he will be unable to qualify the No. 19 Honda. He’ll be racing in the Pirelli World Challenge races in the No. 33 AE Nissan GT Academy Nissan GT-R NISMO GT3 at Canadian Tire Motorsport Park.

Alex Tagliani, in the No. 48 A.J. Foyt Enterprises Honda, went out for an installation lap while teammate Jack Hawksworth in the No. 41 ABC Supply Co. Honda turned his first flying laps of the week after not running on Monday.

Speeds are below. Best overall speeds are the first column (227 and change) with best non-tow speeds to the right (225 on down). 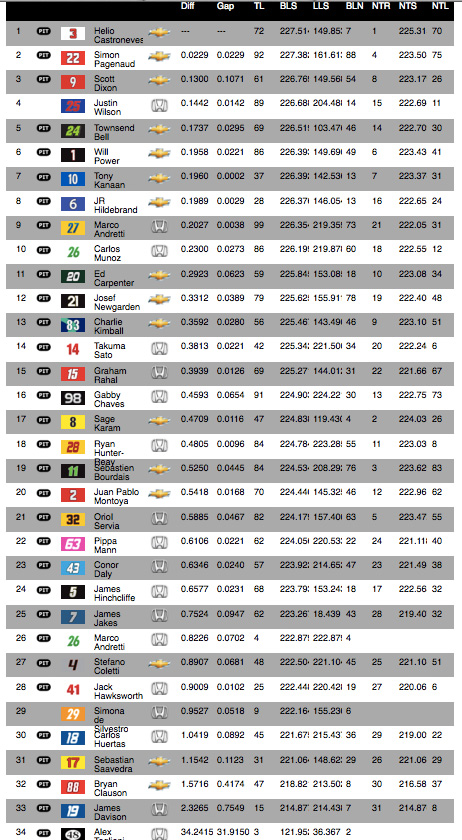