INDYCAR has made the centerline wicker an optional part for both manufacturers, it has been announced today.

The wicker was added to the cars – both Chevrolet and Honda – prior to last week’s Angie’s List Grand Prix of Indianapolis. The wicker was meant to spoil air going over the car when in a state of yaw, or sideways.

Practice has resumed for the Indianapolis 500 this week. As of earlier in the day on Thursday, most if not all Chevrolet teams have removed the wickers from the car.

“After discussions with the Series, we have decided to remove the centerline wicker on all of our cars,” said Jim Campbell, U.S. Vice President Performance Vehicles and Motorsports, in a statement.

Meanwhile most Honda teams have kept the wickers on their cars.

The other aero note of note today was that both Takuma Sato and Jack Hawksworth – the two full-season entrants for A.J. Foyt Enterprises – were the first two Honda drivers to run without the triple element, cascading rear wing on the back of their car. See a screenshot below. 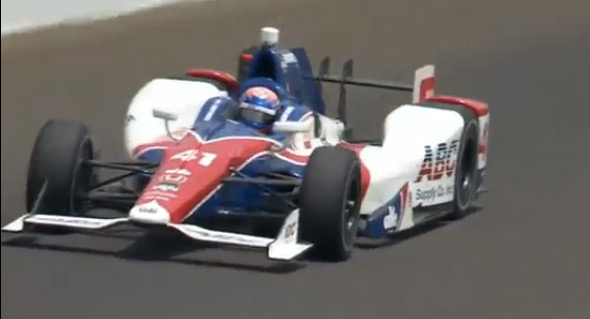