Speeds dipped slightly from Wednesday on Thursday at the Indianapolis Motor Speedway, with Simon Pagenaud leading the way in at 228.793 mph in his No. 22 Avaya Team Penske Chevrolet. Pagenaud also had the day’s fastest no-tow speed of 227.628 mph.

In the no-tow department, Pagenaud led Dixon, Will Power, Kanaan and Juan Pablo Montoya – all between 227 and 226 mph.

However the story emerging at the end of the day was Josef Newgarden’s accident in the final hour, which while similar to Helio Castroneves’ on Wednesday was not identical.

Pagenaud was asked in the post-practice press conference whether he thought the cars were still safe, to which he immediately said yes.

“These cars are safe. IndyCar is trying to make it safer,” Pagenaud said. “We’re going past 230 mph on corner entry. If you have a crash it’s gonna be a big crash.

“It’s still early days. I can’t comment for Josef’s crash, or for Helio’s crash either. It’s too difficult for me to say. The car seems plenty safe because both drivers were OK.”

He did have a one-liner about his Team Penske teammate, though.

“I knew Helio was OK because the first thing he did (after the crash), he adjusted his hair in his suit.”

Speeds from Thursday are below. Note James Hinchcliffe sampled Conor Daly’s No. 43 Smithfield Foods Honda for a bit, Tristan Vautier did his first laps in the No. 19 Dale Coyne Racing Honda, as did 1996 Indianapolis 500 champion Buddy Lazier in the No. 91 Wynn Lazier Racing Partners Chevrolet.

Simona de Silvestro returned to the track in her No. 29 TE Connectivity Honda while Pippa Mann was the only driver not to take part in Thursday’s running, as her Coyne crew repaired her No. 63 Susan G. Komen Honda. 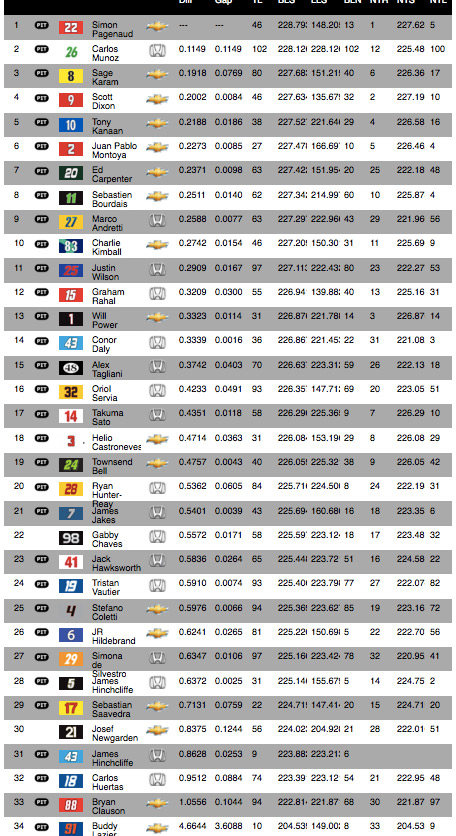