Good news: speeds were up for more single-car, no-tow runs compared to last year’s Fast Friday, as the Verizon IndyCar Series turned the boosts up. Only one car was north of 230 no-tow last year, and several were this year.

And better news: It was an incident-free Fast Friday at the Indianapolis Motor Speedway. There were no accidents, engine failures or other dramatic moments after three straight days of drama prior to the day.

Simon Pagenaud led the overall speed charts for the second straight day, with a best speed of 230.698 mph, in the No. 22 Avaya Team Penske Chevrolet.

The best non-tow speed though was Scott Dixon, at a shade slower at 230.655 mph, in the No. 9 Target Chip Ganassi Racing Chevrolet.

Dixon was one of three drivers who ran non-tow laps north of 230, along with Will Power and Sage Karam, who ended fifth and sixth overall.

On the overall chart beyond Pagenaud and Dixon, Tony Kanaan, Marco Andretti and Power completed the top five.

All 34 driver and car combinations expected to qualify made laps on Friday, notably Pippa Mann in the repaired backup No. 63 Susan G. Komen Honda for Dale Coyne Racing. Coyne’s crew took a car that wasn’t previously prepped for super speedway conditions and Mann made it out in the final eight minutes of the day for a mock qualifying run, immediately getting up to 225-plus mph.

The draw for tomorrow’s qualifying will follow later tonight.

In the interim, here are today’s speeds: 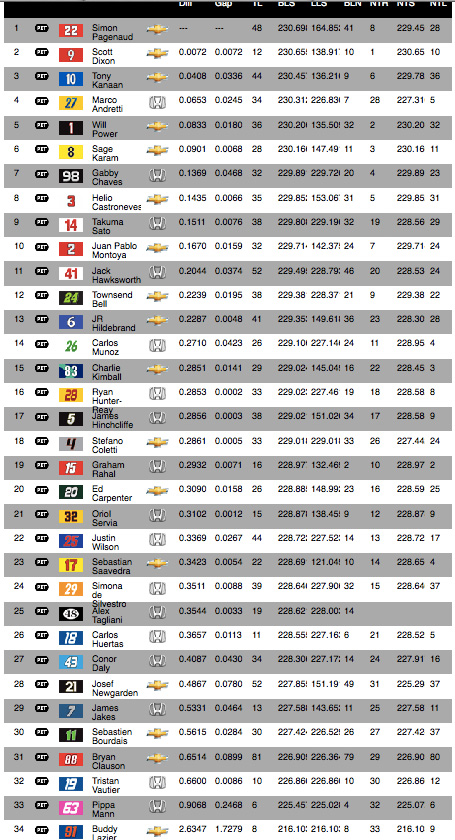