The Indianapolis 500 may dub itself “the greatest spectacle racing”, but the Monaco Grand Prix has a very strong case to claiming that moniker such is its history, legacy and popularity.

Taking place around the streets of the principality, Monaco is often called the “jewel in the F1 crown”. Not only does the race pose one of the biggest challenges in motorsport, but it also sees the rich and famous come out in force for the weekend. The rule in Monaco is if you’ve got it, flaunt it.

The championship arrives on the Mediterranean coast finely poised following Nico Rosberg’s victory at the Spanish Grand Prix two weeks ago. The German driver ended a barren run of form to finally beat Mercedes teammate Lewis Hamilton on-track and bring himself back into the title hunt.

Hamilton is the talk of the town this weekend after his new three-year contract with Mercedes was announced on Wednesday, thought to be worth over $150m. Although it has been something of a formality for some time, to finally have it signed and out in the open will be a weight off both Hamilton’s and Mercedes’ minds.

The Mercedes duo will now be solely focusing on winning this weekend’s race, and both have history around the famous Monegasque streets. Hamilton won the 2008 edition of the grand prix racing for McLaren, but it is Rosberg who is the form driver as he has won the last two events in his hometown city.

Here is our complete preview for the 2015 Monaco Grand Prix.

Only three drivers have won three consecutive Monaco Grands Prix: Graham Hill (a.k.a. Mr. Monaco, 1963-1965), Alain Prost (1984-1986) and Ayrton Senna (1989-1993). This weekend, Nico Rosberg bids to become the fourth following wins for Mercedes in 2013 and 2014. The German driver’s victory in last year’s race was rather controversial following a ‘mistake’ at Mirabeau in qualifying that denied Hamilton a shot at pole position, but he remains the man to beat.

Can Hamilton break his Monaco hoodoo? 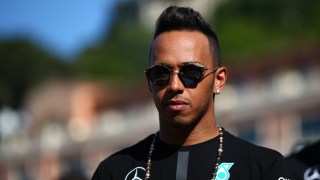 Despite winning the 2008 race, Lewis Hamilton hasn’t enjoyed the same kind of success around the streets of Monaco. In fact, his second-place finish in last year’s race was his first podium finish in the principality since his victory. As he bids to emulate his idol, Ayrton Senna, in 2015 by winning a third world title, Hamilton will know securing a race win at Monaco will go a long way to doing exactly that. With Rosberg cutting the gap in Spain, the pressure is now on the Briton to hit back by doing what he does best: winning.

Ferrari hopes to get in the mix once again

After fading towards the end of the Spanish Grand Prix, Ferrari hopes to bounce back this weekend at a track that should suit the SF15-T, according to Sebastian Vettel. The Italian marque has been a step closer to Mercedes this year than any of the teams did in 2014, and if either Vettel or teammate Kimi Raikkonen – both former winners in Monaco – can get between the Silver Arrows on the front row of the grid, Ferrari could yet stage something of an upset on Sunday.

The Monaco Grand Prix is one of the most eventful on the calendar. Overtaking may come at a premium, but races of attrition are common thanks to the beckoning walls that will punish any drivers that pushes too far. As we saw in last year’s race when Jules Bianchi scored two points for Marussia, surprises can easily be sprung here. Although it is unlikely we’ll see a similar fairytale this weekend, the entire paddock will be thinking of Jules and his heroics 12 months ago.

Some small changes have been made to the circuit for this weekend’s race, including resurfacing at various points on the track. The Formula E drivers that raced in Monaco two weeks ago reported that it was quite slippery, meaning that the F1 field will need to be on guard across the course of the lap. Further to that, the track has been widened at Tabac and on the exit of the Swimming Pool chicane to improve the sight lines for drivers. It should result in a quicker lap, but drivers will need to be careful not to abuse their new-found freedom at these parts of the circuit.