Kanaan, now in the Taylor Swift THE 1989 WORLD TOUR livery, topped the timesheets with a 1:16.2931 near the end of the incident-filled session.

There were five red flags but no major incidents.

Sage Karam, who caused one of the reds with an off exiting Turn 3, ended an impressive second with three Team Penske drivers: Will Power, Simon Pagenaud and Helio Castroneves completing the top five. 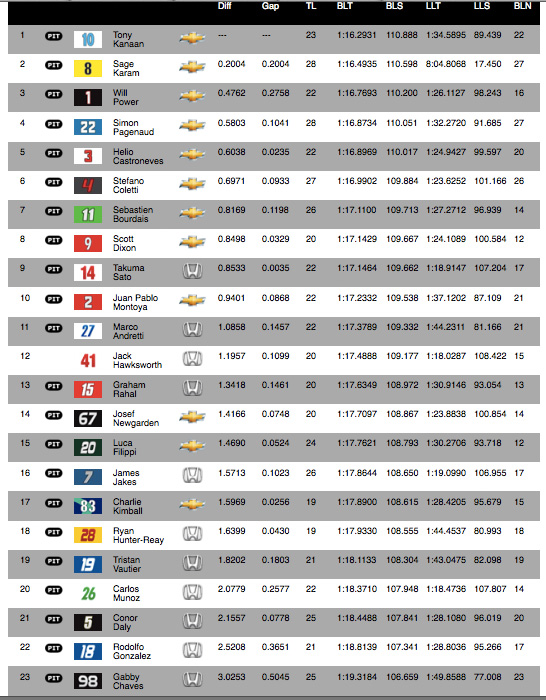 From INDYCAR, there were several aerodynamic changes done prior to the session.

Here is the notification from INDYCAR, per its Daily Trackside Report:

Alterations to the Chevrolet and Honda road/street course aerodynamic platforms have been implemented by corresponding teams for this weekend’s Chevrolet Dual in Detroit presented by Quicken Loans.

“We’ve been very cautious of any change that would make the car a challenge to drive and spoke with the manufacturer beforehand to make sure that wasn’t the case,” INDYCAR vice president of technology Will Phillips said. “The manufacturer understood our motivation and supported this action.”

Teams have installed a patch where the vertical wall had been attached to the front wing assembly. There is minimal balance change required by teams, according to Phillips.

For the Detroit doubleheader, Chevrolet has introduced a winglet on the top of each sidepod for added downforce, creating a potential performance increase on the 2.35-mile, 14-turn street circuit.

“You pick and choose your homologated optional components depending on their efficiency for a specific track. Chevy deems this track is right for this part,” Phillips said.

Here are qualifying groups for the first of two races: