FORT WORTH – Team Penske’s Simon Pagenaud took the top spot late in practice for the Firestone 600 and stayed there with his speed of 216.172 mph.

Kanaan led for most of the session before begin dethroned. Kanaan said following practice the 2.5-mile Texas Motor Speedway was “very slippery” and that at night, when the Firestone 600 will be run, that it would be “even more pronounced.”

The only incident in practice was a one-car crash involving Ryan Hunter-Reay in Turn 2. 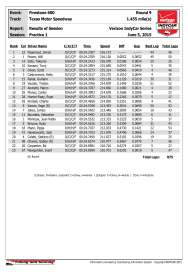