FORT WORTH – It’s hot down here in North Texas, but the heat isn’t making you see triple. Will Power won his third straight Verizon P1 Award at Texas Motor Speedway for the Firestone 600 with an average speed of 218.519 mph.

“I drew number one obviously this morning in the drivers meeting,” Power said. “I was a little worried about the conditions.  It kind of stayed consistent over the whole run of qualifying.  I was really happy to get pole honestly.”

It’s also Power’s fourth pole in 2015, having started P1 in St. Petersburg, the Indianapolis road course and race one of the Dual in Detroit. Team Penske will start from the pole for the eighth time in nine races in 2015. The only exception came with Scott Dixon in the Indianapolis 500.

“The race, it’s going to be interesting.  You know, you got all this stuff you can put on to add downforce if you want,” Power said.  “But it’s quite draggy, so you lose a bit of speed.  It’s going to be about finding the right compromise for speed loss versus grip.  I guess we’ll try some things tonight and see how it all stacks up.”

The quartet was broken up by the last qualifying attempt, made by Andretti Autosport’s Carloz Munoz and his average speed of 217.831. 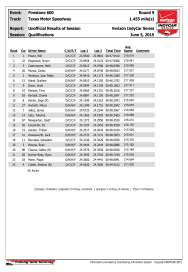