FORT WORTH – Thirty minutes before the start of the Firestone 600, Scott Dixon was moaning.

He hadn’t gotten his way.

Sitting seventh on the starting grid, Dixon knew the front four cars, three of them belonging to Team Penske, had low-downforce settings simialar to what Dixon wanted.

The three-time Verizon IndyCar Series champion had engaged in a 24-hour debate with Chris Simmons, the engineer on his No. 9 Ganassi Racing Chevrolet.

Dixon thought the debate had gone his way.

“Then at about 1:00 this afternoon I got a text message from Chris Simmons saying we were going the other way,” Dixon said Saturday night. “Then I went and saw him and tried to push him to go back.”

Dixon’s argument didn’t work. After leading a race-high 97 laps and winning his 37th career IndyCar race, he wasn’t moaning. In victory lane, Dixon was “over the moon.”

“You put yourself in a situation to race hard at the end of the night with some good speed and we actually put a lot more (downforce) on,” Dixon said.

“The debate went back and forth. We were thinking about splitting the cars as far as (downforce) levels and things like that. But in hindsight, I’m glad they understood what they were doing. That’s why they do what they do. I just drive the car.”

Dixon drove his way to his second win at Texas Motor Speedway, the first coming in 2008. His second win of 2015 gained him 20 points on championship leader Juan Pablo Montoya.

“At the start of the race I think we got a little bit too far back in the pack,” Dixon said.  “With the understeer we already had, it just built more.  By the middle run, we just had no front tires left on the car. 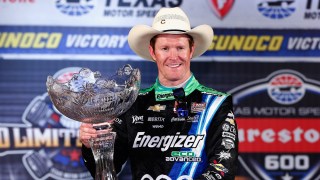 “That’s where I think the team did a really good job through the night.”

“As Scott said, the first go there, the first run, we were terrible,” Hull said. “The one that raced with us all night (Castroneves) was probably halfway between our downforce level and the other three cars.”

Dixon’s teammate, Tony Kanaan took the lead for the second on Lap 103 and by Lap 110, Dixon was in second, remaining less than a second behind Kanaan for the next 30 laps.

“I knew obviously with the speed and how Tony had moved up there that the car was good because we weren’t too different, you know, especially on the levels of downforce,” Dixon said. “The mechanical side was a little bit different, but fairly close. I knew once we got the balance right, we could be up there with him, probably duel it out with him towards the end.”

On Lap 139 Kanaan hit pit road and Dixon assumed the lead for the first time. The rest of the 248-lap race, outside of green flag pit stop sequences, belonged to Dixon. He would get his dual with Kanaan but the Brazillian was never able to retake the point position. Dixon ultimately finished with a 7.8 second lead after green flag stops.

“Mid to latter part of the race, we were running a lot of flat-out laps,” Dixon said. “That was a transition where I thought there might be a crossover with some of the other guys that were trimmed out. We were able to manage the tires in the last 10 laps of a stint where it really counted, and we didn’t have much falloff, and that’s really what made the difference.”