Penske’s Juan Pablo Montoya set the pace during the first free practice session for this weekend’s Honda Indy Toronto on Friday as the IndyCar field got to grips with the bumpy street circuit.

Montoya posted a fastest lap time of 1:00.6343 as the Penske drivers traded fastest laps towards the top of the timesheets throughout the session.

First practice was shortened to just 40 minutes after a number of delays throughout the morning, with the session not starting until just before 11am ET.

Once it did, Simon Pagenaud was the early pace setter for Penske, but the Frenchman was unable to sustain this form to the end of the session as Montoya came closest to dipping under the one minute mark.

Although he failed to turn a lap in less than 60 seconds, Montoya did enough to finish P1, beating Pagenaud into second place by 0.1579 seconds. CFH Racing’s Josef Newgarden rounded out the top three, finishing ahead of teammate Luca Filippi and KV Racing’s Sebastien Bourdais.

Defending Verizon IndyCar Series champion Will Power could only finish the session in sixth place ahead of teammate Helio Castroneves in P7. Graham Rahal finished eighth, whilst Charlie Kimball and Tony Kanaan rounded out the top ten in P9 and P10 respectively.

The session was brought to an early end after Scott Dixon’s Ganassi stopped out on track, warranting a red flag period. With less than two minutes remaining in the session, the track did not return to green before the checkered flag was shown, bringing first practice to a close.

Drivers will get another chance to put in some laps around the streets of Toronto in second practice, which is set to kick off at 2:45pm ET. 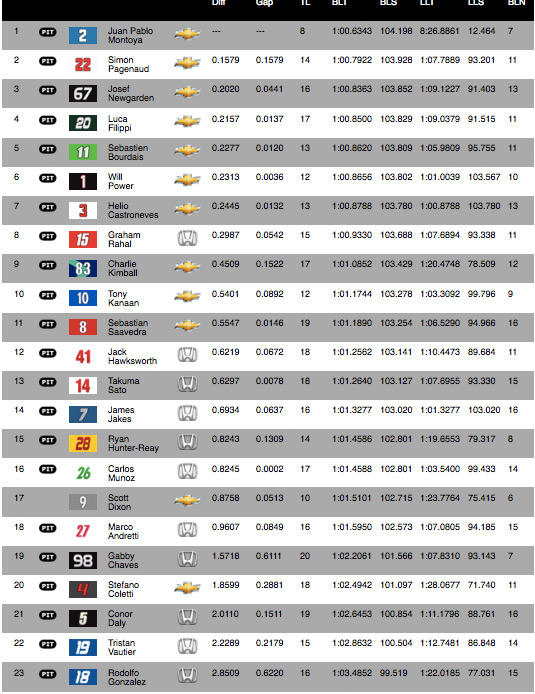