Kimi Raikkonen remains unsure what exactly caused the crash between himself and Fernando Alonso on the first lap of yesterday’s Austrian Grand Prix.

Coming out of turn two, Raikkonen appeared to gain too much wheelspin and suffer a ‘tank slapper’ – when the fuel in the car sways, causing it to go off-balance – before his car jerked to the left and into the helpless Alonso.

The two drivers slammed into the wall and Alonso’s car moved on top of Raikkonen’s before coming to rest on his nose cone. Thankfully, both drivers escaped the shunt unharmed.

Speaking after the race on Sunday, Raikkonen – who called out reporters on ‘BS’ stories earlier this week – revealed that he was unsure what exactly caused the crash. 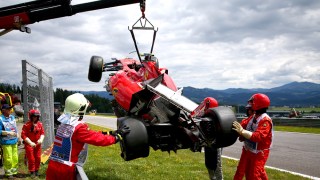 “I don’t know exactly what happened before the crash, I had some wheelspin in an unusual place,” Raikkonen said.

“I was at a quite high speed, suddenly went left and ended up there. I did not see anything coming, everything happened very quickly.

“Unfortunately at that time my race was over, it has been a poor weekend, now we have to think about next one.”

A communication error in qualifying caused Raikkonen to drop out in Q1, and following his mistake that cost Ferrari a podium in Canada, the Finn does appear to be under scrutiny at the moment.

However, the FIA stewards did not blame Raikkonen for the incident, deeming the accident to have been a racing incident following a post-race investigation.