The e.dams driver produced a stunning lap of 1:24.648 in the final stage of qualifying to take pole by over four-tenths of a second from Dragon Racing’s Jerome d’Ambrosio.

Title rivals Lucas di Grassi and Nelson Piquet locked out the second row of the grid, leaving the championship fight finely-poised ahead of the race later today.

Q1 saw di Grassi lay an early claim to pole position in his bid to get back ahead of Piquet at the top of the standings by setting the fastest time. The Brazilian managed to edge out e.dams driver Nicolas Prost after the first part of qualifying by just 0.153 seconds, with Sam Bird finishing a further six-tenths of a second back due to a battery issue.

Fabio Leimer finished his first Formula E qualifying in the wall, which in turn prevented Stephane Sarrazin from posting a quicker lap, leaving him fourth in Q1.

Andretti’s Jean-Eric Vergne headed up the second group in qualifying as he went in search of a fourth pole position of the season, but an early mistake cost him dearly. A lock-up in the middle sector meant that he had to abandon his first lap, and his second full-power effort was only good enough for second place behind di Grassi.

Oliver Turvey made an impressive start to life in Formula E by ranking fourth after the first two groups, whilst Bruno Senna rounded out the top five at the halfway point in the session.

The third group resembled something of a throwback to the 2006 F1 season as Jarno Trulli, Sakon Yamamoto and Nick Heidfeld all headed out on track. However, none of the trio were able to topple di Grassi at the top, with Heidfeld finishing as the lead Q3 car in eighth place. Daniel Abt went ninth, whilst Karun Chandhok ended the session in the wall after locking up at the final corner.

In the fourth and final qualifying group, the title race took a big swing as Sebastien Buemi shot to the top of the timesheets with his first lap, going four-tenths quicker than di Grassi to secure pole position for the London ePrix. Championship leader Nelson Piquet Jr put together a ragged lap, leaving him fourth overall.

Jerome d’Ambrosio dealt another blow to di Grassi’s title hopes by edging out the Brazilian driver by just one-thousandth of a second for second place, relegating the title fighter down to third on the grid.

In a rather tantalizing prospect for the title race, we have the three serious championship contenders starting within the top four, and with the likes of d’Ambrosio and Vergne lurking, the fight for the race win at Battersea Park is set to be an intense one. 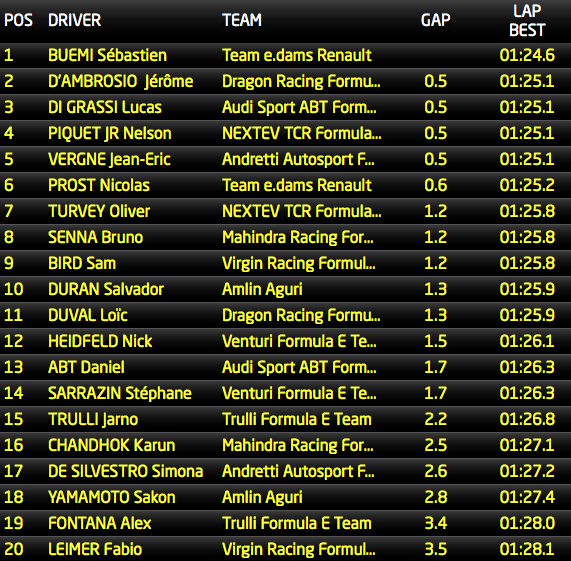 The London ePrix kicks off at 4pm local time at Battersea Park on Saturday.