LONDON – Venturi’s Stephane Sarrazin will start the final race of the inaugural FIA Formula E season from pole position after posting the fastest time during qualifying in London on Sunday afternoon.

The French driver took full advantage of an early running slot in the session to post a fastest lap time of 1:23.901, edging out Jerome d’Ambrosio at the top of the timesheets.

In another twist of fate ahead of the championship decider this afternoon, a heavy rain shower meant that both Nelson Piquet Jr and Lucas di Grassi were unable to qualify inside the top ten.

However, Saturday winner Sebastien Buemi was fortunate to be sent out in Q2, allowing him to finish sixth and be the leading title fighter on the grid for the final race of the season.

Ahead of Sunday’s running at Battersea Park, a portion of the first corner was re-tarmaced to allow the stewards to remove the yellow flag zone and the TecPro barrier that had been implemented on Saturday due to safety concerns.

As the Q1 group headed out on track at the beginning of qualifying, light rain began to fall at Battersea Park, giving the drivers an additional challenge for the session.

Stephane Sarrazin made light of the conditions, though, posting a fastest lap time of 1:23.901 to lead the way after the first quintet had taken to the track. However, with the three championship contenders all in separate groups and to follow, his position was far from secure.

Saturday pole-sitter Sebastien Buemi was the stand-out runner in the second group in qualifying, with the three points on offer for P1 set to play a big part in deciding the fate of the title. However, the Swiss driver was unable to produce a repeat display, fading in the second half of his final lap to lie sixth at the halfway point in qualifying.

Before any of the drivers in Q3 were able to post a lap time, a red flag was issued after Sakon Yamamoto crashed his Amlin Aguri car, forcing the rest of the runners to return to the pits. However, the break allowed time for a heavy rain shower to hit Battersea Park, making conditions more difficult when the session resumed.

Championship leader Nelson Piquet Jr gave everything he had on his flying lap, pushing hard and kicking the back-end of the car out, but his lap was only good enough for P12. The conditions meant that all five of the Q3 runners filled out positions 11-15, lapping around ten seconds off the dry pace.

The rain eased ahead of Q4, playing to di Grassi’s advantage as he looked to keep his hopes of winning the Formula E title alive in qualifying. The Brazilian bided his time and saved his full power laps until later in the session when the track was dryer, allowing him to qualify 11th.

Oliver Turvey also ran well in the wet to finish 12th ahead of Simona de Silvestro in 13th, with Nicolas Prost finishing 15th in Q4. The end result was that Piquet had been demoted to 16th on the grid by the end of the session, leaving his championship hopes in serious doubt.

The advantage now lies with Buemi, but with the grid mixed up and rain threatening to also hit during the race later on Sunday, the battle of Battersea is far from over. 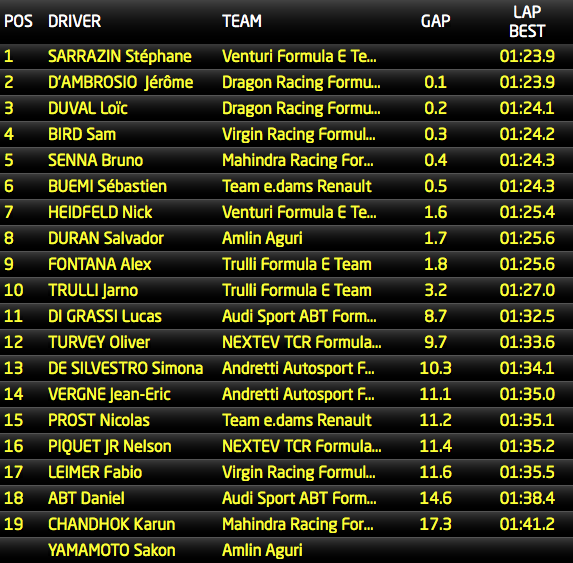