As in practice one, Chip Ganassi Racing teammates Tony Kanaan and Scott Dixon ended 1-2 for the Verizon IndyCar Series’ 45-minute second practice session for the Iowa Corn 300. Kanaan’s best speed was 181.273 mph, at a blistering 17.7544 seconds around the 0.894-mile Iowa Speedway.

Overall though, Chevrolet drivers dominated the session. There was a top 11 sweep by Chevrolet runners with Ryan Hunter-Reay best of the Hondas, 0.2881 of a second off Kanaan and with a best speed of 178.379 mph. Hunter-Reay was actually a bit quicker in the first session and was the only driver not to improve his or her speed in the session.

Some drivers were unable to get clear qualifying runs and some others experimented with different downforce levels, so speeds may not be entirely representative going into tomorrow’s qualifying.

It was also a scorcher of a day – temperatures were still north of 90 degrees Fahrenheit ambient and 130 on track in the afternoon.

Speeds are below. Qualifying is next up, from 3 p.m. CT and local time on Saturday. 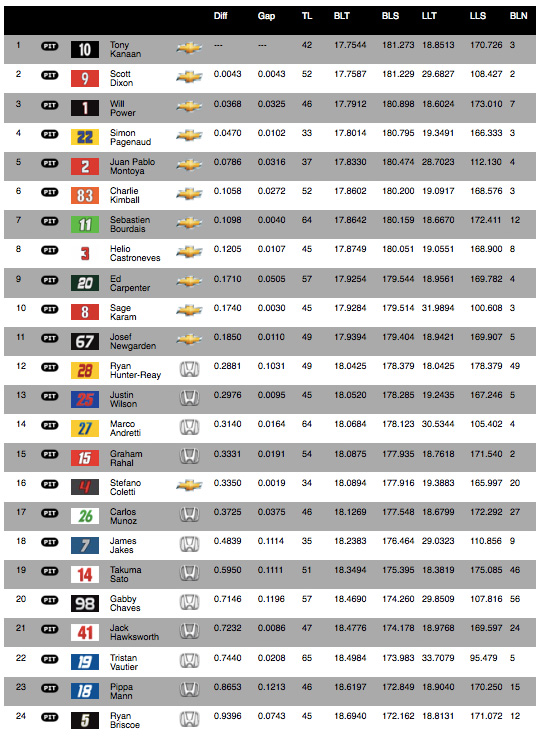