“That was definitely tricky conditions. Got better and better, and I knew it would come down to the last two or three laps. Made some significant changes and it really helped the car a lot,” Enerson told IndyCar Radio’s Rob Howden.

Enerson added during the press conference that “he’d be more nervous if (Harvey) wasn’t next to him.”

Several times within the final 15 minutes of the 35-minute session, as track conditions improved as the track rubbered, Enerson and Harvey swapped the top spots.

Enerson was first in the 1:13 range, with Harvey and Enerson then exchanging the lead three different times before Enerson set the ultimate pole time of 1:12.9687 in the No. 7 Lucas Oil Dallara IL15-Mazda.

Harvey leads Spencer Pigot by 18 points and Ed Jones by 20 heading into the first of this weekend’s two Indy Lights race.

Pigot qualified third, while Jones struggled to 10th in the session. 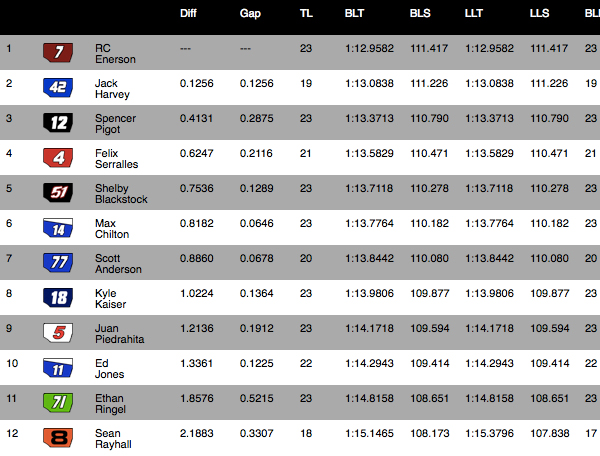