It’s been a roller coaster season for the Verizon IndyCar Series.

And there’s two more final weeks of twists and turns to come.

What seemed unfathomable at the start of the year, that you’d have five drivers in realistic title contention with two races to go including the single-car effort of Graham Rahal and Rahal Letterman Lanigan Racing in his much-discussed career year, is now fully in play heading into 500 miles at Pocono and the sinewy, twisty turns of Sonoma.

Oddly, it’s Sonoma, the season finale, and not Pocono, the 500-miler, which sees double points in play. It’s a variable that could definitely swing the championship and has kept more drivers in play.

The potential storylines then, to follow, out of the next two weeks:

Just two races ago at Milwaukee, Juan Pablo Montoya led Scott Dixon by 54 points, and Graham Rahal was tied for third, some 69 points back.

Two races later, Rahal has cut 60 of those 69 points back.

Montoya – and for that matter Team Penske – has not been delivering the results needed the last couple months.

Montoya has not finished on the podium since his thrilling win at this year’s Indianapolis 500, some eight races ago. His best finish is fourth on three occasions.

On the whole, Team Penske has only five podium finishes in the last eight races. A good number for most teams, but consider this is a four-car Chevrolet-powered mega lineup and out of a combined 32 races the only podium results are one second place by Helio Castroneves and four thirds – split two apiece between Castroneves and Simon Pagenaud – and Penske is far from the Penske Perfect it needs to be at this point in the season. Contrast that to the nine podiums the team achieved in the first six races and it’s clear the early season advantage is long gone.

In recent years, Penske’s title drought from 2007 through 2013 was the storyline at this time of year. It does not want to lose another title in a year where it has already captured the Daytona and Indianapolis 500s, and is also well-positioned ahead of NASCAR’s Chase for the Sprint Cup.

CAN RAHAL, RLL, HONDA REALLY PULL IT OFF?

Anyone who bet Rahal and RLL would be in IndyCar title contention at this stage of the year, at the beginning of the year, is likely a very rich man or woman at the moment.

Odds were low that after 18th and 19th place finishes in the standings the last two years, Rahal would even win a race this year, let alone head into the last two races with a shot at the championship.

But you know the story by now. The latest reorganization of the team and Bobby Rahal’s stepping back, letting Ricardo Nault run the program and the collective gelling between Graham and the trio of Eddie Jones, Martin Pare and Mike Talbott has produced incredible results.

The No. 15 Honda-powered team is on a hot streak, with five top-four finishes in the last seven races, to propel Graham from fifth at Detroit race one, 81 points back of Montoya, to only nine back now. 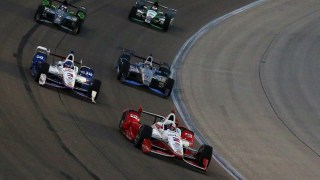 Scott Dixon, Helio Castroneves and Will Power still have outside title hopes but are more likely to shuffle between third and fifth, currently separated by 25 points. Dixon has a streak of finishing in the top three points for nine straight years, from 2006 through 2014, and looks to extend that to 10 years straight.

The gap from sixth-placed Sebastien Bourdais to ninth-placed Tony Kanaan is also only 25 points, with Marco Andretti and Josef Newgarden sandwiched in-between.

It’s likely to come down to Simon Pagenaud, Ryan Hunter-Reay and Carlos Munoz for the 10th and final place in the top-10 in the year-end standings.

There remain a number of off-track items to sort as well. More to follow in the next couple weeks – hopefully this doesn’t cloud the on-track agendas the next two weeks – but these are all items to pay attention to:

All told, plenty to play for the next two weeks at Pocono and Sonoma.