Karam posted the second fastest speed of 220.788 mph while recording the most laps of the morning with 83.

“It’s a lot different from driving Indy Lights here, that’s for sure,” Karam told the IMS Radio Network. “It’s going to be who can get the balance right. Our car seemed pretty good. We were a little understear in Turn 3, but other then that, even in traffic in Turn 1 we’re pretty good.”

Practice ended with a caution for Stefano Coletti hiting the wall out of Turn 3, which kept Karam from making a qualifying simulation.

Graham Rahal, who is nine points behind Montoya for the points lead, spent much of the practice session in the low 20s before the team made a spring adjustment. Rahal finished the session 11th fastest at 219.167 mph.

“We were on a good 220 lap, I had to bail out due to understear,” Rahal told IMS Radio. “When we first went out, the balance was great, but I don’t why it couldn’t get out of the 211’s. It was the weirdest thing ever. We had this at Fontana too … we were way at the back.’

Rahal said he wasn’t sure where he’s qualifying pace will be. He and the rest of the field will find out at 2 pm ET on NBCSN. 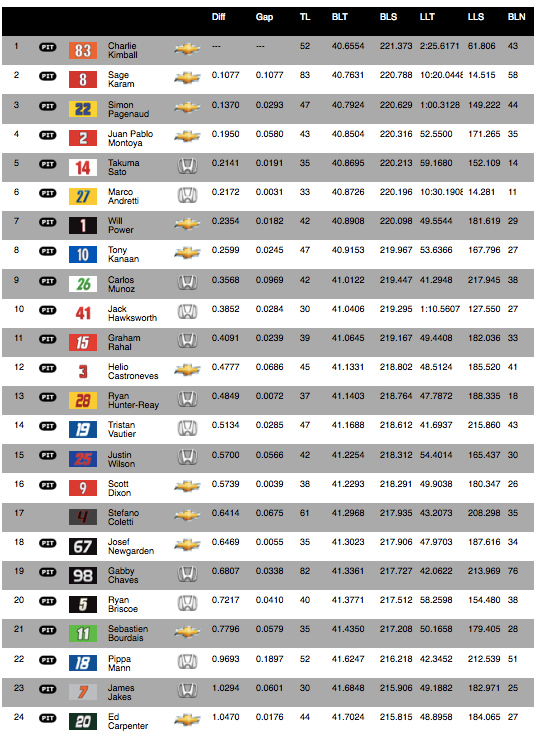