Double the amount of base points, in addition to bonus points, could have a major impact on who emerges as the 2015 Verizon IndyCar Series champion following Sunday’s season-ending race at Sonoma Raceway.

Juan Pablo Montoya has led the points since winning the season opener at St. Petersburg. The 1999 CART champion is seeking his first IndyCar title after joining the series last season after seven years of competing in NASCAR.

To earn the championship and the Astor Cup trophy without needing any additional help, Montoya must finish first or second in the GoPro Grand Prix of Sonoma. One other way is if Montoya’s closest challenger, Graham Rahal, who comes into the race 34 points behind, fails to win Sunday and Montoya finishes no lower than third place.

Double base points brings an added dimension of excitement and uncertainty that ultimately means even the driver who is furthest behind Montoya in points – Josef Newgarden (-87 points) – still has a chance of pulling off a big upset, albeit a slim one.

But the bonus points and various scenarios don’t seem to matter much to Montoya, who remains confident he can win the title.

“Same thing as every week: Go out there and do the best we can, see what happens,” Montoya told IndyCar.com. “It’s double points, so it’s open for anything. I feel if we run a smart day all day, we’ll be fine.”

Also courtesy of IndyCar.com, here’s a chart of virtually all possible scenarios to determine this year’s champion: 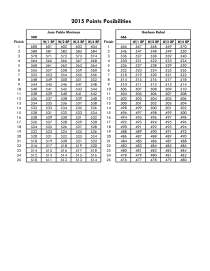 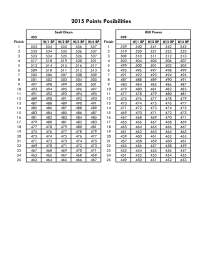 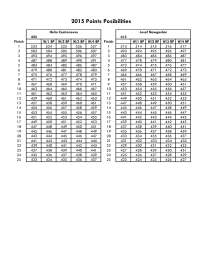