SONOMA, Calif. – Regardless of whether you called it a promoter test session or the first official practice – both were overheard on Friday at Sonoma Raceway – the driver who wears No. 1 on his car ended the day No. 1 on the timesheets.

Defending Verizon IndyCar Series champion Will Power, who still has a mathematical if remote shot to defend his title this weekend, set the fastest time in the three and a half hour marathon session at 1:17.4858 around the 2.385-mile Sonoma Raceway circuit in the No. 1 Verizon Team Penske Chevrolet.

Graham Rahal, Ryan Hunter-Reay, Scott Dixon and Marco Andretti completed the top five, and Simon Pagenaud in six made it the top six in the 1:17 bracket.

Points leader Juan Pablo Montoya clocked in ninth, 0.6043 of a second behind Power.

Temperatures cooled substantially from 94 degrees ambient and 129 on track to start the session, down to 86 ambient and 111 by the end of it. Notably, the tires fell off over the course of the day.

The only red flag, for three minutes and 32 seconds, occurred almost immediately after the green flag when Oriol Servia stopped on course at Turn 2 in the No. 25 Andretti Autosport Honda. Servia reversed course and retreated back to the pit lane. The Spaniard ended the day 25th and last at 1:19.6981.

Otherwise there were 984 laps completed in total in the session. 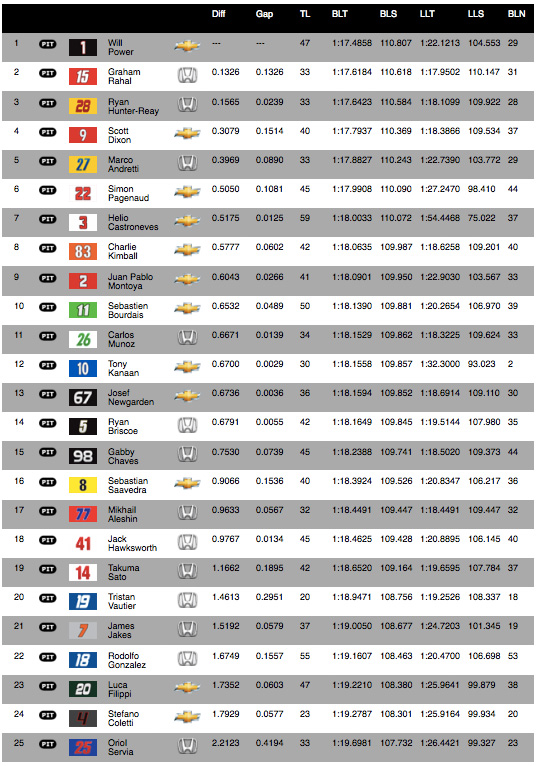