Hunter-Reay banked his ultimate lap flier early of 1:16.8702 in the No. 28 DHL Honda, a lap time that is nearly a full four tenths faster than Will Power’s track record around the 2.385-mile road course of 1:17.2393 set last year in qualifying.

Hunter-Reay edged Graham Rahal, whose No. 15 Steak ‘n Shake RLL Honda team made some significant rear wicker changes on the car and also sent him out on a fresh set of sticker Firestone blacks towards the end of the session. Rahal posted a 1:16.8989.

Championship leader Juan Pablo Montoya was fourth with Scott Dixon completing the top five. All of the top five drivers have two wins this season.

Sebastian Saavedra ended 11th despite losing most of the session after stopping on track at the Carousel, and then heading into the drag strip area. His car was retrieved by the Holmatro Safety Crew and returned to the pits. It brought out the only red flag in the session, roughly at the halfway mark.

Times came down more than a second from yesterday, with temperatures significantly cooler in the morning. A half hour prior to the session, temperatures were 72 degrees ambient and 85 on track; by the green flag time at 10:45 a.m. PT it was 84 and 93, respectively, per Firestone.

Times are below. Qualifying is at 3:05 p.m. PT, 6:05 p.m. ET and live on NBCSN and NBC Sports Live Extra at 3:30 p.m. PT, 6:30 p.m. ET, with the potential of starting earlier if the NASCAR Xfinity Series broadcast from Road America ends earlier. 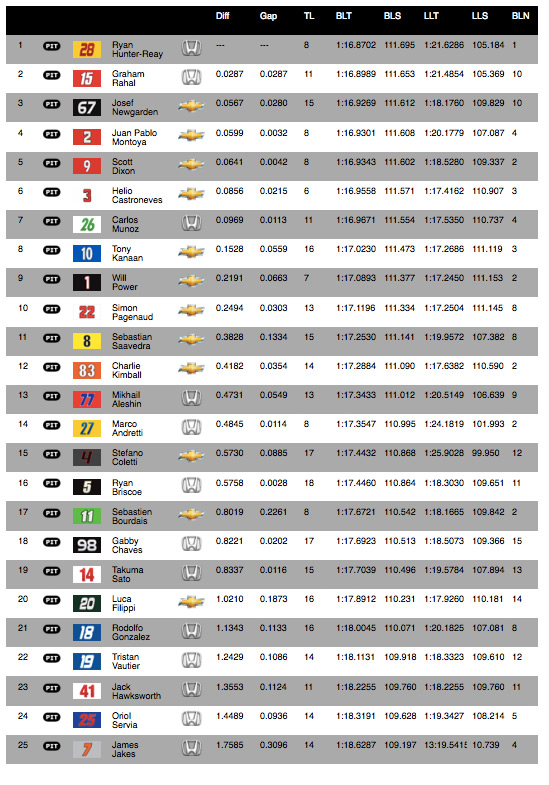