The final practice for the Verizon IndyCar season finale is in the books, setting the final stage for the GoPro Grand Prix of Sonoma.

Will Power, the pole-winner and one of the six drivers still in contention for the title, was the fastest in the session at with a time of 1:17.810.

The GoPro Grand Prix of Sonoma will air on NBCSN and the broadcast begins at 4 pm ET. 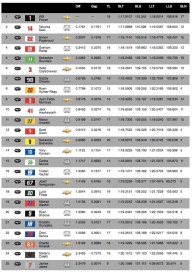