At least two of the four major NHRA pro championships could be decided in this weekend’s 15th annual Toyota Nationals at The Strip at Las Vegas Motor Speedway.

Antron Brown needs to leave Las Vegas 151 points ahead of his closest rival to clinch his second career Top Fuel title (and his second in four years).

Meanwhile, in Pro Stock, Erica Enders leads closest rival and four-time former champ Greg Anderson by 154 points. Like Brown, if Enders can leave Las Vegas with a lead of 151 or more points, she will earn her second consecutive Pro Stock title.

At the same time, Brown added with a boatload of confidence, “We already prepared this whole year for this moment. We’re contending for a championship and we’re right where we want to be, so what do we have to lose?”

Brown has staked his claim on the title with an outstanding season, leading all drivers with seven wins in the first 22 races, including three straight to start the six-race Countdown to the Championship playoff.

The 2015 season has been the best of Brown’s career. In addition to hitting the 50 career wins milestone (he has 54 heading into Las Vegas), he also set the Top Fuel elapsed time record of 3.680 seconds in mid-August at Brainerd, Minn.

While he’s made it look easy at times this season, it’s far from it, Brown insists.

“It’s ridiculous how crazy tough this class is and think that’s what prepared us for the Countdown,” Brown said. “We lost close races this year and it’s rough out there. That really got us motivated, geared up and pumped up for the Countdown. When we came into the Countdown, we came in prepared. We knew we had to give our A-plus game and we knew we couldn’t slip up.”

Even with the huge lead on Schumacher, Brown is taking nothing to chance.

After Las Vegas, just one race remains: the season-ending finals at Pomona (Calif.) Raceway in just over two weeks from now. 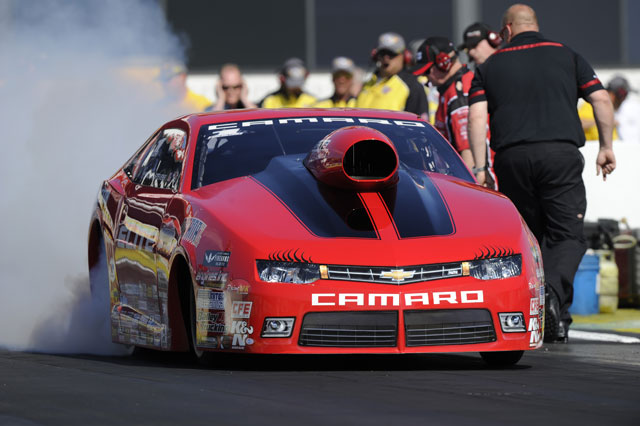 But it won’t be easy for her in Sin City. Anderson has won a record seven times at the Bruton Smith-owned drag racing palace.

Even though she has a lead of more than one full race worth of points and can clinch the title, Enders isn’t taking anything to chance this weekend.

“By no means is it over yet,” Enders said. “I know there’s only eight rounds of racing left, but there are a lot of bonus qualifying points to be gotten. We still have to go out there and do our job.

“We’re not going to change the way we race because of our point lead. We’re just going to stay focused and we want to win the final two (races) – and the championship – and that’s what we’re going to set our goals at.”

While Brown and Enders have comfortable leads in their respective classes, it’s the exact opposite in Funny Car and Pro Stock Motorcycle, with very tight battles in each class.

Del Worsham is seeking his first career Funny Car championship, and is hoping to become the third driver in NHRA history to championships in both Funny Car and Top Fuel.

Worsham, who has won three of this season’s first four Countdown races, leads former Funny Car world champ Jack Beckman by 38 points. Tommy Johnson Jr. is in third place (147 points back) and is seeking to stave off elimination Sunday.

Louisiana alligator farmer Jerry Savoie is a close third, just 31 points back, while Hector Arana Jr. is fourth, 81 points back.

Final eliminations will begin Sunday at 11 am PT.

WHERE: The Strip at Las Vegas Motor Speedway, Las Vegas. Track is located approximately 15 miles north of Las Vegas off I-15.