Some very cool news has emerged this evening from Australia, as a new team called PIRTEK Team Murray has been launched, featuring Matthew Brabham driving in a two-race program in the month of May at the Indianapolis Motor Speedway.

Brabham, son of Geoff and grandson of the late Sir Jack Brabham, and a past champion in both the Cooper Tires USF2000 Championship Powered by Mazda and Pro Mazda Championship Presented by Cooper Tires, will make his Verizon IndyCar Series debut in the KV Racing Technology-affiliated effort at the Angie’s List Grand Prix of Indianapolis, then will attempt to qualify for the 100th Indianapolis 500. 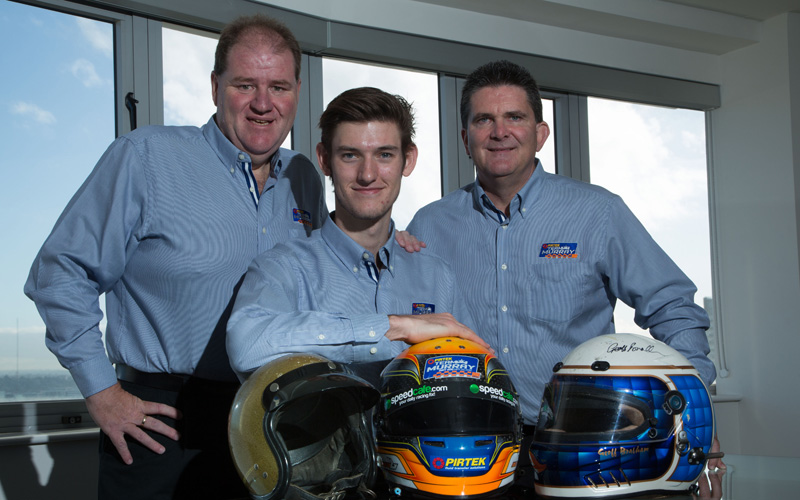 International fluid transfer solution specialists PIRTEK have created the opportunity of a lifetime for Matt Brabham in next year’s 100th Indianapolis 500, set to take place on May 29.

Brabham, just 21, will become just the third third-generation driver to qualify for the 500, following in the footsteps of his grandfather Sir Jack who drove the first ever rear-engined car in the race in 1961 and his father Geoff, who had a best finish of fourth from his 10 starts (1981-1993).

The team has been created by Australian motorsport identity, Brett “Crusher” Murray and will be run in conjunction with KV Racing Technology, who won the Indy 500 in 2013 with Tony Kanaan.

The entry will be known as PIRTEK Team Murray and will compete in the Angie’s List Grand Prix road course race at Indianapolis on May 14 and the 100th running of the Indy 500 on May 29.

The PIRTEK USA master franchise was brought back under the Sydney-based Duncan family umbrella in December 2014. The Duncan’s created what has become a globally-recognised franchise network from humble beginnings in Sydney’s Western Suburbs in 1980.

Executive Director of PIRTEK International, Glenn Duncan, is overseeing a national expansion plan of its unique franchise model that integrates mobile and ‘bricks and mortar’ service and supply centers across the 48 mainland US states.

Globally, PIRTEK has successfully used sports – and motorsport in particular – to promote its brand for more than 30 years. Duncan believes that the 100th running of the Indy 500 will provide the perfect platform to accelerate awareness of the PIRTEK franchise system and products to the wider US market.

While preparing for the 100th Indy 500 will be significant enough, PIRTEK will be working with Team Murray management on a series of business and charitable initiatives leading up to the May events.

Details of that next phase of the team’s program will be announced at a major media conference in Indianapolis next week.

The investment will also be leveraged globally, but especially in the Australian and New Zealand markets where the Brabham name is legendary.

The PIRTEK program holds even more significance when you realise that Matt was born in the US, raised in Australia and now resides in Indianapolis, Indiana.

Brabham has spent the last four years forging his open-wheel career in the US. He won the USF2000 and Pro Mazda Championships before progressing to Indy Lights.

He is set to get seat time in a varied list of events in preparation for next year’s Indy 500, which he is hoping will lay the foundation for a full-time IndyCar drive.

21-year-old Brabham will be the ninth Australian to qualify for the Indianapolis 500 since Rupert Jeffkins, from Maitland in NSW, drove in the very first event in 1911 in a car entered by the Velie Motor Company, from Illinois.

PIRTEK Team Murray was officially launched in Sydney today where Matt is taking part in Stadium Super Truck exhibition races as part of the final round of the V8 Supercars Championship around Sydney Olympic Park.

At the same time the team also launched a detailed website which will become an enormous resource for fans and the media.

For an in depth history of the Indianapolis 500, the history of Australians and Kiwis at the event and everything you need to know about the “greatest spectacle in racing” head to http://www.teammurray.com.au