Usually race drivers don’t wind up driving the pace car until years after their active career has come to a conclusion. See Rutherford, Johnny and Luyendyk, Arie as two modern day examples of Indianapolis 500 champions taking that approach.

Consider Ryan Hunter-Reay’s New Year’s Day opportunity an exception, then, and a very cool one at that.

Hunter-Reay will be driving a new 2016 Acura NSX to lead the Tournament of Roses Parade – albeit trading his 225-230 mph top speed for a 2.5 mph top speed he’ll have to maintain for 5.5 miles, or two hours and 12 minutes.

Next year’s Rose Parade presented by Honda is the 127th edition. Hunter-Reay, the 2014 Indianapolis 500 and 2012 Verizon IndyCar Series champion, will lead the field including Honda’s “Nature’s Hope” float along with 43 others.

The event takes place New Year’s Day at 11 a.m. ET, 8 a.m. PT on a number of networks, including NBC (others include ABC, HGTV, Univision, RDFTV).

For Hunter-Reay, who’s experienced a cool amount of items in his career, getting to lead the field joins the list of awesome opportunities.

“We discussed it for the 2015 Rose Bowl after winning the ’14 Indy 500, but the timing didn’t add up,” Hunter-Reay told MotorSportsTalk.

“We put it up now with the NSX hitting the road. It’s perfect timing. I’m honored to be representing the sport and IndyCar and Indy 500, as winner and champion.

Hunter-Reay is yet to see the new 2016 NSX in person; the car has come a long way from a “prototype” it was when it made demonstration laps at the Mid-Ohio Sports Car Course a couple years ago.

“This’ll be the first time to go,” he said. “It’s a new year’s tradition. It’s pretty cool to get to do it as American champion.”

Hunter-Reay’s presence in the Rose Parade is a rarity for an IndyCar driver. Two-time Indy 500 winner Rodger Ward, who won in 1959 and 1962, was in the 1963 Rose Parade on the state of Indiana’s “Memorable Moments in Indiana” float. A replica of Rodger Ward’s 1962 Indy 500-winning roadster was on the float.

As for the Rose Bowl itself, Hunter-Reay said although he doesn’t have a particular favorite between Iowa and Stanford, he’ll lean more towards the Big Ten team.

“I don’t really have skin in the game. (But) I’d have to go for Iowa, (considering I have) three wins and the second place. That’s a special place. One of my favorite spots to go to.”

His day job, of course, is driving the No. 28 DHL Honda for Andretti Autosport.

You can see a full infographic of RHR’s Rose Parade game plan, below. 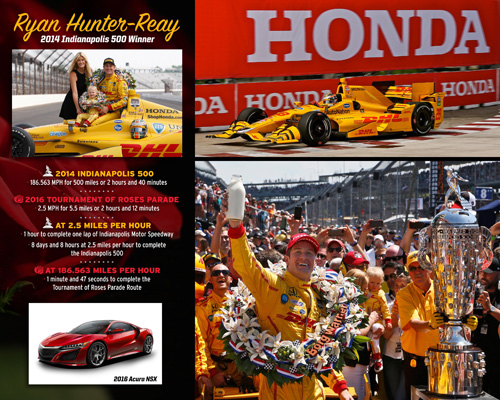