Blake Shelton’s a big name, and a big headliner for the Saturday Firestone Legends Day Concert the day before the 100th Indianapolis 500 presented by PennGrade Motor Oil. 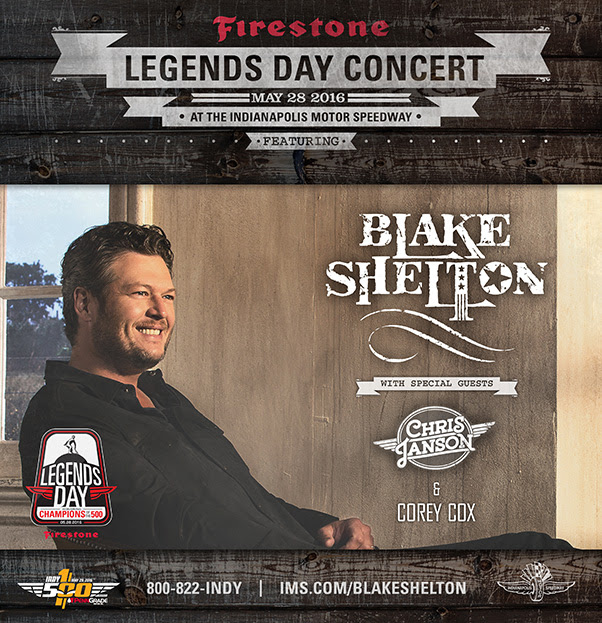 Country music superstar Blake Shelton will headline the annual Firestone Legends Day Concert on Saturday, May 28, the day before the historic 100th Running of the Indianapolis 500 presented by PennGrade Motor Oil. Current IMS customers can purchase tickets now through a pre-sale while an official on-sale date is slated for Feb. 29 at 9 a.m.

Shelton is known both for his role as a judge on the televised singing competition “The Voice” as well as his award-winning singing career. The Country Music Association’s 2012 “Entertainer of the Year,” Grammy nominee and five-time CMA Awards Male Vocalist of the Year, Shelton continues to add to his superstar status. With 16 consecutive No. 1 singles, Shelton owns the record of successive No. 1 singles in the modern era. He has a total of 21 No. 1 singles, which are all featured on his new album “Reloaded: 20 #1 Hits.”

Joining the ranks of the Grand Ole Opry in 2010, Shelton has earned a host of awards and nominations throughout his career. Shelton begins his 10th season on NBC’s “The Voice” on Feb. 29 and is also set to host Nickelodeon’s slime-filled “Kids’ Choice Awards” on March 12. He will hit the road in February for his Blake Shelton presented by Gildan tour. For more information and upcoming tour dates, please visit http://www.BlakeShelton.com and follow @BlakeShelton.

“The Firestone Legends Day Concert has become a staple for fans of country music and racing, and we’re proud to carry on this tradition with Blake Shelton the night before the historic 100th Running of Indianapolis 500,” said Philip Dobbs, chief marketing officer at Bridgestone Americas Tire Operations. “Firestone is a work-hard, play-hard brand, and we invite everyone to come out to the Indianapolis Motor Speedway on May 28 for a celebration unlike the Speedway has ever seen.”

“Legends Day presented by Firestone is a special part of Indy 500 weekend when fans can celebrate the history of the race and look forward to a great Race Day on Sunday,” said J. Douglas Boles, Indianapolis Motor Speedway president. “The Firestone Legends Day Concert has featured tremendous country music in recent years and our 2016 lineup, headlined by a true superstar in Blake Shelton, will provide an outstanding experience for fans. The energy from his show will undoubtedly carry over to the 100th Running of the Indianapolis 500.”

The opening acts for Shelton will be Chris Janson and Corey Cox.

Warner Bros. Records/Warner Music Nashville singer/songwriter Chris Janson burst on to the scene last year with his breakthrough No. 1 Platinum single “Buy Me A Boat,” which went on to be the seventh-bestselling country song of the year. His current single, “Power of Positive Drinkin,” is climbing the country charts now. Janson’s “overnight success” was built on 10 years of honing his songwriting craft and relentlessly perfecting his live shows in clubs. His dream to play the Grand Ole Opry has now resulted in more than 130 appearances. Janson co-wrote all 11 tracks on his debut album “Buy Me A Boat,” which was named one of the 20 Best Country Albums of 2015 by Rolling Stone with the New York Times calling it an “impressive full length debut album.” Having previously toured with Toby Keith and Luke Bryan, Janson recently kicked off his tour with labelmate Blake Shelton with dates running through March.

Corey Cox is a Hoosier native who fans remember from performances at the Super Bowl XLVI Village in Indianapolis, his memorable rendition of the national anthem at the 2012 NASCAR XFINITY Series race at the Indianapolis Motor Speedway, and his breakthrough hit “Wake Up Drunk.” He has built his name through relatable lyrics, contagious songs and energetic live shows across the country.

General admission tickets for the concert are priced at $40 and access to the Firestone Concert Pit near the front of the stage is set for $75. All ticket information can be found at http://www.ims.com/blake or by calling (800) 822-INDY.

Fans with tickets for the Firestone Legends Day Concert will be admitted free to Legends Day activities. Admission to IMS on Legends Day will be $10 for adults, with children 12 and under free when accompanied by an adult.

Other featured events on Legends Day presented by Firestone include the annual Public Drivers’ Meeting on pit road adjacent to the Tower Terrace grandstand, autograph sessions with the Indianapolis 500 starting field of 33 drivers and former Indy 500 drivers and an Indianapolis 500 memorabilia show.

The 100th Running of the Indianapolis 500 presented by PennGrade Motor Oil will be held on Sunday, May 29.