Teams from the Verizon IndyCar Series will take to historic Phoenix International Raceway for the first time in more than a decade for this Friday and Saturday’s first open test of the season.

PIR previously hosted Indy Cars from 1964 through 2005. The series returns to PIR for its first race since then on April 2, a Saturday night event under the lights.

Here’s the entry list for this weekend’s test. Of note, Alexander Rossi is not present as was expected and neither is Spencer Pigot from Rahal Letterman Lanigan Racing, who will run three races but not Phoenix.

Ed Carpenter is the lone partial season driver confirmed to test, while Luca Filippi has been listed in the second Dale Coyne Racing Honda.

The track will be closed to fans on Friday, but will be open to fans on Saturday from 11:30 a.m. MST through 8 p.m. MST. It will be the first chance for fans to see the updated aerodynamic bodywork for both Honda and Chevrolet teams.

On-track testing for both days will run from Noon to 3 pm MST and again from 5 to 8 pm MST. 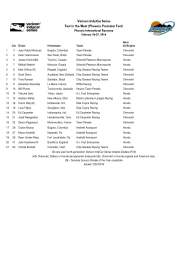