AVONDALE, Ariz. – Helio Castroneves edged ahead of Team Penske teammate Will Power to end fastest in the first three-hour test session of the day at Phoenix International Raceway, the Verizon IndyCar Series Test in the West, a.k.a. “PrixView.”

It’s an unofficial track record as speeds and times from a test don’t go into the record books. But it was ahead of Arie Luyendyk’s official mark, set in 1996, on the old layout, at 19.608 seconds and a speed of 183.599 mph.

With Castroneves on top, it interrupted the usual IndyCar spring training storyline of teammate Will Power dominating, whether it’s at Sebring, Barber or now Phoenix.

Basically all runs were single-car runs, and there wasn’t much passing. It appears to be a one-groove track.

Josef Newgarden interrupted the Team Penske party at the top of the pylon, with 186.942 mph his best speed in the No. 21 Fuzzy’s Vodka Chevrolet for Ed Carpenter Racing in third place.

Juan Pablo Montoya was fourth, while Simon Pagenaud, who was the first driver in the 184 mph-range this morning, ended sixth in the session.

Of note, Gabby Chaves was 11th overall and third Honda in his first session with Schmidt Peterson Motorsports. 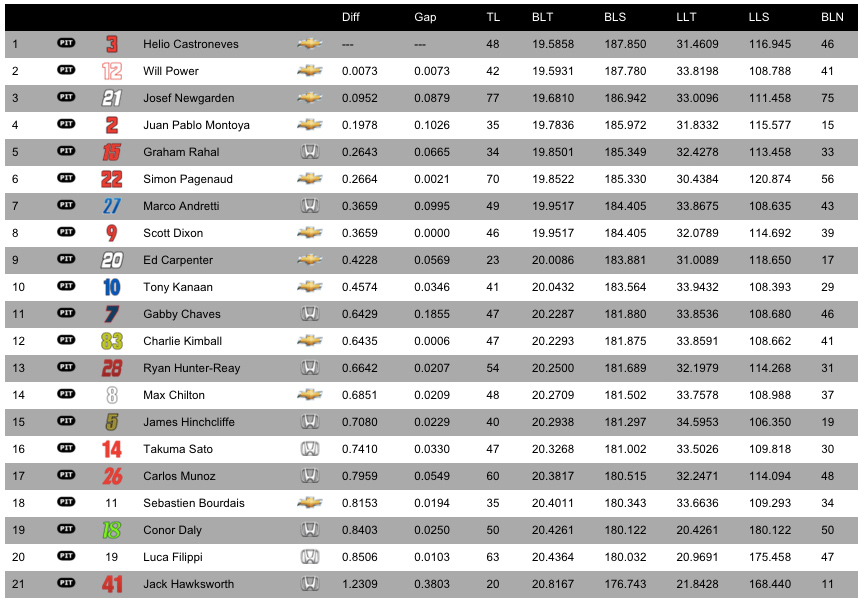