The Verizon IndyCar Series season starts next week in St. Petersburg and the first race on NBCSN will follow on April 2 at Phoenix.

In the build-up to the new season, though, NBCSN pit reporter Kevin Lee is putting together a great new event for charity, the first “Kevin Lee Grand Prix” in partnership with Fastimes Indoor Karting in Indianapolis.

Here’s more information about the event and the charity raising efforts: 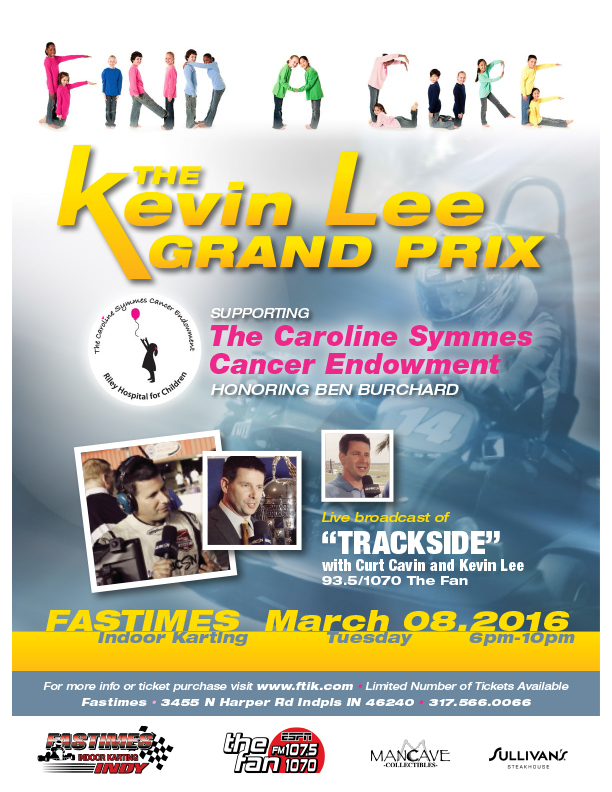 Fastimes Indoor Karting in Indianapolis and 93.5/1070 The Fan radio are teaming up to present “The Kevin Lee Grand Prix,” on Tuesday, March 8, from 6-10 p.m. ET. The event will raise money for children’s cancer research with funds going to The Caroline Symmes Cancer Endowment at Riley Hospital for Children.

“The Kevin Lee Grand Prix” is also in honor of Ben Burchard, a 12-year-old quarter midget racer from Brownsburg, Indiana, who recently lost his battle to Osteosarcoma.

Lee is a pit reporter on NBCSN’s IndyCar coverage and the host of the Indy Lights Presented by Cooper Tires and Mazda Road to Indy shows on NBCSN and also co-hosts “Trackside” – a weekly IndyCar radio show with Curt Cavin of the Indianapolis Star on 93.5/1070 The Fan in Indianapolis. A live edition of the radio show will originate from the event from 7-9 pm.

Tickets are available at this Eventbrite link.

A $50 donation includes at least one kart race including at least one professional driver or Indianapolis-area celebrity, along with food, drink and access to the event. A $25 donation is good for everything except a race.  The first 80 to register also receive an event T-shirt. Donations are also welcome. There will also be a silent auction with racing and sporting memorabilia and experiences.