The Red Bull Global Rallycross series has confirmed Atlantic City, New Jersey at Bader Field, as its East Coast site to fill the one remaining TBA date on the schedule, August 27-28.

The Atlantic City round confirmation follows other recent track/site confirmations at Fair Park in Dallas (June 4) and Evergreen Speedway in Seattle (Sept. 17). Phoenix’s Wild Horse Pass Motorsports Park was confirmed as the site for the season opener, May 21-22.

The full release from Red Bull GRC is below: 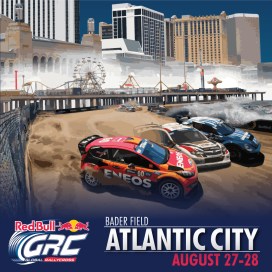 Red Bull Global Rallycross returns to the East coast with a brand new event in Atlantic City, New Jersey on August 28. The race will take place at Bader Field, the first municipal airport licensed to serve both airplanes and seaplanes, and more recently a host to numerous concerts and festivals.

“Bader Field is a great location for Red Bull Global Rallycross,” said Red Bull GRC CEO Colin Dyne. “Its wide open spaces will allow us to design one of the fastest tracks of the season, while its proximity to major urban markets ensures that our many passionate fans from the northeast will have a home race to attend. We can’t wait to bring our high-octane brand of motorsport to Atlantic City for the first time!”

Located on the back bays of Atlantic City, Bader Field sits between the Atlantic City Expressway and world-famous Boardwalk. The Red Bull GRC track will take advantage of the historic municipal airfield to build one of its fastest tracks of the 2016 season. Spectators will be treated to multiple passing zones and clear views of the entire multi-surface course, including the series’ signature 70-foot jump.

“We are very excited to host this thrilling motorsport event for the first time in Atlantic City. The uniqueness of this event venue will allow racers and spectators to appreciate the surroundings Atlantic City has to offer,” said Jim Wood, president and CEO of Meet AC and the Atlantic City Sports Commission.

Red Bull GRC’s most recent race in the northeast took place in 2014, when Tanner Foust claimed victory in the series’ visit to New York. Foust is among many of the world’s top rallycross drivers expected to compete in Atlantic City, alongside Brian Deegan, Bucky Lasek, and defending series champion Scott Speed.

Tickets for Red Bull GRC Atlantic City at Bader Field are on sale now. Adult GA tickets are available at early bird prices of $25 through July 24, while kids ages 12 and under are free with a ticketed adult. For more information and to purchase online, please visit http://www.redbullglobalrallycross.com/tickets.