Skrillex is the headliner but clearly not the only big name that the Indianapolis Motor Speedway has recruited for the Snake Pit on race day for this year’s 100th Indianapolis 500 presented by PennGrade Motor Oil.

Here’s the release from the Speedway: 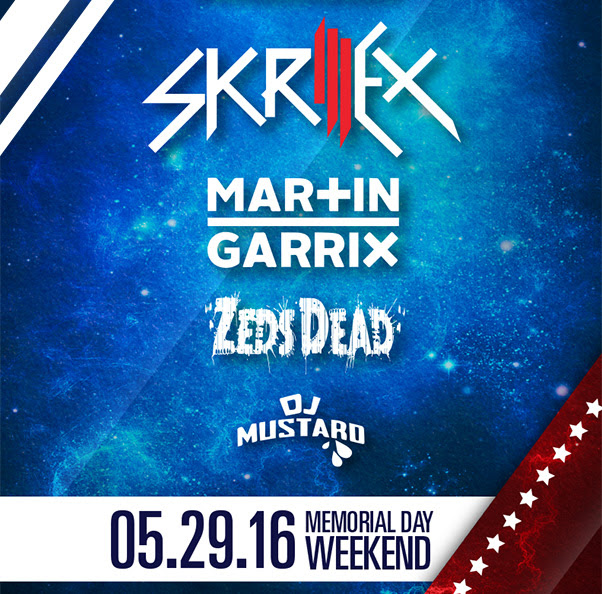 Global electronic music icon Skrillex will headline the Indy 500 Snake Pit presented by Coors Light during the monumental 100th Running of the Indianapolis 500 presented by PennGrade Motor Oil. Fast-rising superstar Martin Garrix and popular acts Zeds Dead and DJ Mustard will join him in packing the infield with thousands of excited fans on Race Day.

General admission and VIP tickets for this massive May 29 event are on sale now for $20 and $85 at http://www.ims.com and http://www.Indy500SnakePit.com. All Snake Pit ticketholders must also hold a valid Indy 500 general admission or reserved seat ticket. Packages that include Race Day GA tickets are available.

“Some of the biggest electronic music acts in the world are set to throw the best Race Day party in town,” said J. Douglas Boles, Indianapolis Motor Speedway President. “You won’t find a better or more unique place to see an artist like Skrillex or Martin Garrix than the Indianapolis Motor Speedway on Race Day. It’s going to be a blast for thousands of fans and a can’t-miss event.”

Skrillex has won a total of eight Grammy Awards, sold over 10 million singles to date and played 500 shows in 35 countries since 2010. In 2013, he was the most-played artist on SoundCloud and the fourth-most viewed artist on YouTube. His massive hit “Scary Monsters & Nice Sprites” sold millions of copies and helped instigate one of the largest shifts in modern American music in recent memory, the galvanizing totem of a new youth movement. His 11,000-square-foot compound nestled in the heart of L.A. houses his label, OWSLA, as well as the futurist venture NESTHQ.com. The latter project was formed as a means of iterating the values of the dance community, Skrillex’s community, in one consistently positive voice.

It’s easy to get lost in the numbers behind Martin Garrix’s meteoric rise. The Dutch superstar has already set precedents and scored landmarks at every corner of the music industry. He has made Billboard’s prestigious “21 under 21” list as well as Forbes’ “30 under 30” list and won an MTV European Music Award for Best Electronic Dance Act. His double platinum hit “Animals” has to date garnered more than 100 million streams on Spotify and over half a billion views on YouTube. Martin’s ambitions are ramping up for 2016. With loads of fresh new tracks on the way and a full agenda with every major festival worth attending on it, this young adult whiz kid shows that he’s at the forefront of today’s electronic music scene.

Zeds Dead has an enormous catalogue that includes remixes for some of the biggest artists out there, and releases with the most credible labels in the game. They’ve accumulated hundreds of millions of views online and play live to hundreds of thousands of people annually.

DJ Mustard is an award-winning artist and mega-producer who coined the “ratchet” sound, bringing a hot, new and different sound to hip-hop. In just three years, DJ Mustard has sold over 20 million singles and constructed a registry of hits for the likes of Tyga, 2 Chainz, Young Jeezy, Kid Ink, Y.G, and nabbed collaborations with Fergie, Jennifer Lopez, Wiz Khalifa, Trey Songz, and more. Mustard executive produced YG’s debut album “My Krazy Life,” which peaked at No. 2 on Billboard 200, No. 1 on R&B/Hip-Hop and No. 1 on the Rap charts. In 2015, he became the first artist to win both R&B/Hip-Hop Songwriter Of The Year and R&B/Hip Hop Producer Of The Year at the BMI R&B/Hip-Hop Awards.