ST. PETERSBURG, Fla. – The Verizon IndyCar Series is underway for the 2016 season with the first 75-minute practice in the books for the Firestone Grand Prix of St. Petersburg.

There wasn’t a ton of running during the session, but Simon Pagenaud led overall with a best time of 1:01.7246 in the No. 22 Hewlett Packard Enterprise Chevrolet.

“It’s first practice of the year. The car feels nice right now but a lot of work still to do,” Pagenaud told IndyCar Radio’s Nick Yeoman.

The biggest story to emerge out of the session, however, was Will Power suffering an accident at Turn 9 in the No. 12 Verizon Team Penske Chevrolet.

Power, just five laps into the day, ran wide at the left-hand kink and sustained heavy right side damage – but it was not apparent whether something broke on the car to cause the accident. His car stopped at the runoff at Turn 10 and caused a red flag.

Power did drive by on a scooter in the paddock, so was OK after the contact. Per Team Penske, Power was apparently adjusting brake bias and his hand slipped on the wheel, which was also something NBCSN IndyCar analyst Townsend Bell observed.

Strange. Only thing I can guess is that the wheel slipped in his hand as he was adjusting bias. No power steering https://t.co/vAAeHkyEgu

Per @Team_Penske : Will Power was apparently adjusting brake bias and his hand slipped on the wheel just before @GPSTPETE crash. @IndyCar

Of note, the four rookies, Alexander Rossi, Spencer Pigot, Conor Daly and Max Chilton clocked in 18th, 19th, 20th and 22nd, with Mikhail Aleshin in 21st. None has had a massive amount of testing time, and Rossi led the quartet.

Temperatures began at 78 degrees Fahrenheit ambient and 87 on track, per Firestone, but rose to 76 and 100 45 minutes into the session. 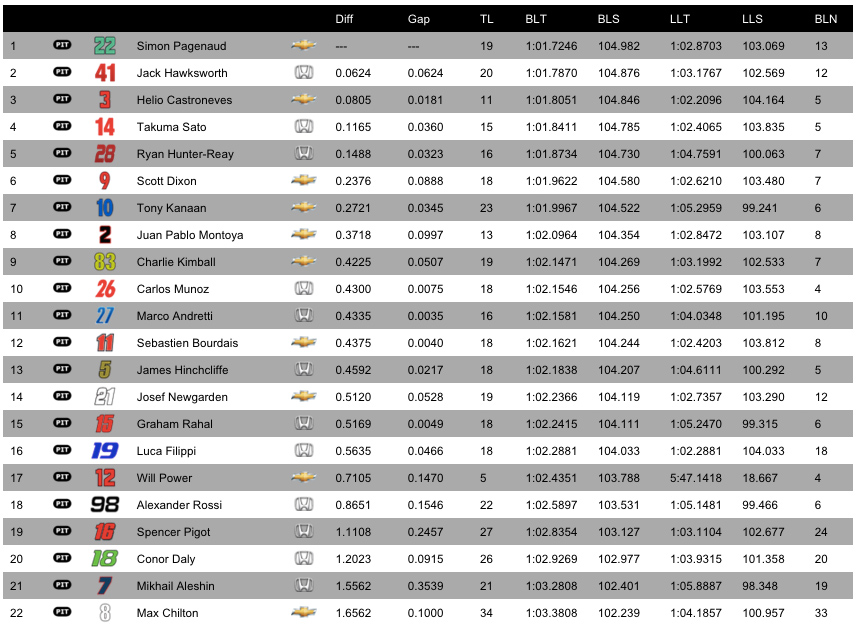