ST. PETERSBURG, Fla. – Will Power closed on his own track record of 1:00.6509 during Friday’s second practice for the Verizon IndyCar Series’ season opener, the Firestone Grand Prix of St. Petersburg.

Even more impressive was the fact he pulled it off in a repaired No. 12 Verizon Team Penske Chevrolet, courtesy of the effort from all four Team Penske crews to repair the car after his accident in the morning session.

With both drivers already in the 1:00 range on Firestone’s harder black tires, a new track record once teams bolt on the softer Firestone red alternate tires is well within range.

Simon Pagenaud, the morning session leader, Graham Rahal and Takuma Sato completed the top five. Rahal, in the No. 15 Rahal Letterman Lanigan Racing Honda, was fastest Honda in P4 at 1:01.2924.

Meanwhile there was a long red flag for track cleanup as some concrete came up exiting Turn 3, the right-hand flier of a kink. It cost the session more than 30 minutes of run time, before the session was extended past 5 p.m.

Alexander Rossi also had an off course trip at Turn 10, running in too deep, but got restarted with no issues in his No. 98 Andretti Herta Autosport with Curb-Agajanian Honda. Rossi was as high as second on the timesheets at one point in the session.

The temperatures were warmer this session with 82 degrees Fahrenheit ambient and 109 on track, per Firestone, to start the session at 3:40 p.m. 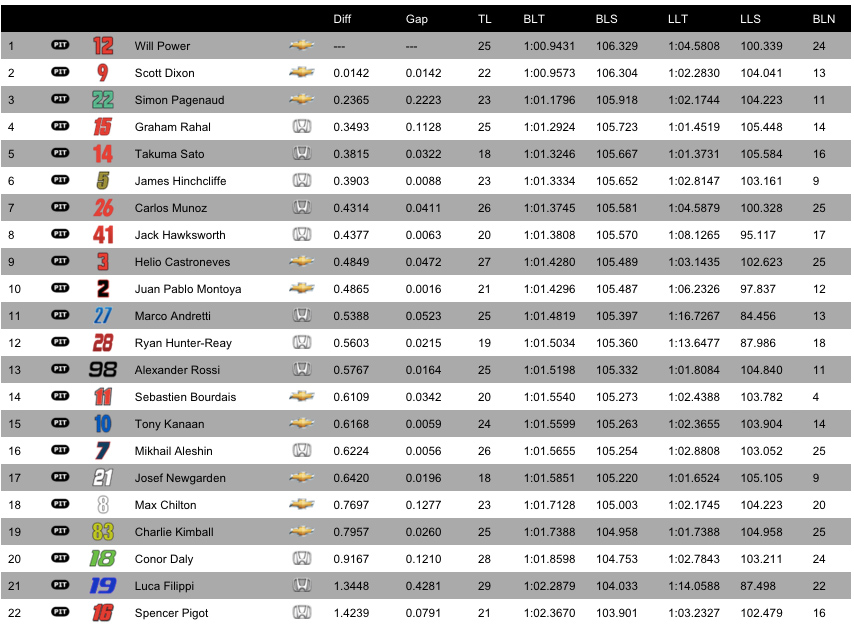