ST. PETERSBURG, Fla. – Perhaps not the outright fastest either on the day or the weekend, for the second straight year Juan Pablo Montoya was the cagiest driver en route to securing the win at the Firestone Grand Prix of St. Petersburg.

Montoya, in the No. 2 Verizon Team Penske Chevrolet, won the Verizon IndyCar Series season-opener courtesy primarily of a Lap 64 pass to the inside of surprise leader Conor Daly in Turn 1 off a restart.

But he set it up courtesy of a well-timed move on erstwhile dominant force Simon Pagenaud on the previous restart, for second, to edge ahead of the driver who led the opening 47 laps.

Montoya was on course to lead a Team Penske podium sweep of its three full-season drivers, ahead of Pagenaud in the No. 22 Hewlett Packard Enterprise Chevrolet and Helio Castroneves in the No. 3 Hitachi Team Penske Chevrolet.

They got the 1-2 as Montoya beat Pagenaud by 2.3306 seconds after 110 laps, but Ryan Hunter-Reay made it up to third near the finish.

Hunter-Reay spoiled the Penske podium party with a dynamic move on Castroneves into Turn 4 with three laps to go in the No. 28 DHL Honda of Andretti Autosport, to finish third and get back on the podium.

Alas, the result followed a top-four qualifying sweep on Saturday for the second straight year.

Pagenaud inherited the pole position after teammate Will Power was ruled out pre-race, diagnosed with a mild concussion. Oriol Servia then took over the No. 12 Verizon Team Penske Chevrolet car.

Behind the top four, Mikhail Aleshin ended fifth in an impressive return to full-time competition in the No. 7 SMP Racing Schmidt Peterson Motorsports Honda.

Daly, who’d been in a position to steal a win or more likely a podium, led the middle portion of the race but had a couple different pit stops back-to-back. He needed a new front wing on his second stop in the No. 18 Jonathan Byrd’s Hospitality Honda to make the distance.

He’d been net fifth behind Montoya, Pagenaud, Castroneves and Aleshin prior to his last stop and ultimately ended in 13th.

Of note, Alexander Rossi was on course to deliver a debut top 10 in the No. 98 Andretti Herta Autosport with Curb-Agajanian Honda in 10th place, but fell to 12th in the final stages.

Other rookies Spencer Pigot and Max Chilton were 14th and 17th.

Servia, filling in for Power, ended 18th, a spot ahead of the returning James Hinchcliffe. 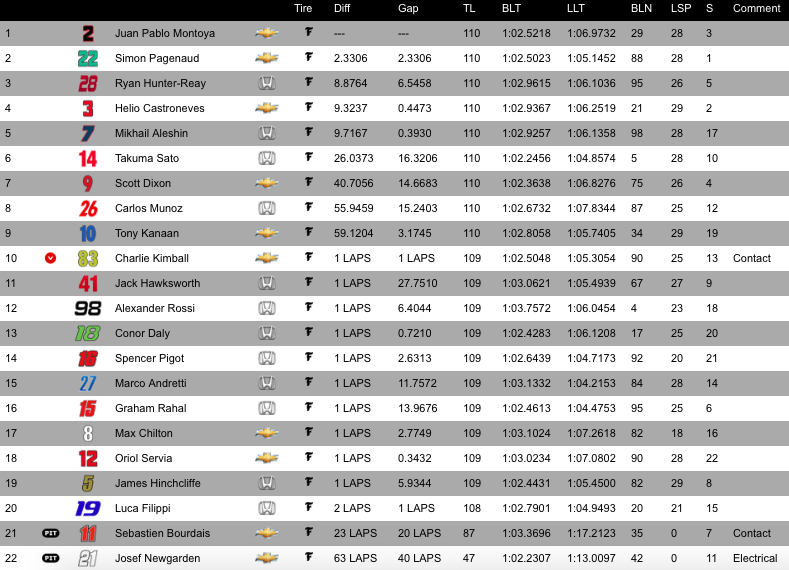