A. J. Foyt Enterprises continued its strong start to the first weekend of the 2016 Verizon IndyCar Series season as Takuma Sato headed the timesheets in the warm-up for the Firestone Grand Prix of St. Petersburg.

Sato and teammate Jack Hawksworth showed a good pace throughout practice, and will start the 110 lap race from P11 and P10 respectively later today.

It proved to be a somewhat uneventful session until the finish when 2015 St. Petersburg winner Juan Pablo Montoya crashed his Penske at Turn 7, ending the session under a red flag and leaving his crew with plenty to repair ahead of the race later today.

It proved to be the latest in a series of setbacks for Penske, who may be without pole-sitter Will Power for the race later today as he continues to struggle with illness.

Oriol Servia deputized for Power in the no. 12 Verizon Team Penske car in warm-up, finishing the session in ninth place. By completing the session he is now eligible to race should he be required.

Spencer Pigot’s continued to learn from his mistakes on his debut IndyCar weekend, causing a red flag seven minutes into the session when he came to a stop in the run-off area. Once the recovery team had got the car back going again, Pigot was able to return to the pits before continuing in the session under green.

Josef Newgarden finished as the top Chevrolet-powered driver in third place ahead of Marco Andretti and Scott Dixon, while Simon Pagenaud led Penske’s charge in sixth. Schmidt Peterson Motorsports drivers Mikhail Aleshin and James Hinchcliffe both made the top 10 despite suffering spins, and were joined by Sebastien Bourdais who finished eighth.

Helio Castroneves narrowly missed out on the top 10, finishing 11th ahead of Tony Kanaan and Montoya. Charlie Kimball ended the session 14th in front of Luca Filippi and debutant Alexander Rossi, the latter being the top rookie in the session.

Conor Daly bounced back from an early engine issue to finish 17th ahead of Ryan Hunter-Reay and Pigot, while Max Chilton, Jack Hawksworth and Carlos Munoz rounded out the bottom three places at the checkered flag.

The Firestone Grand Prix of St. Petersburg is due to go green at 12:52 ET on Sunday. 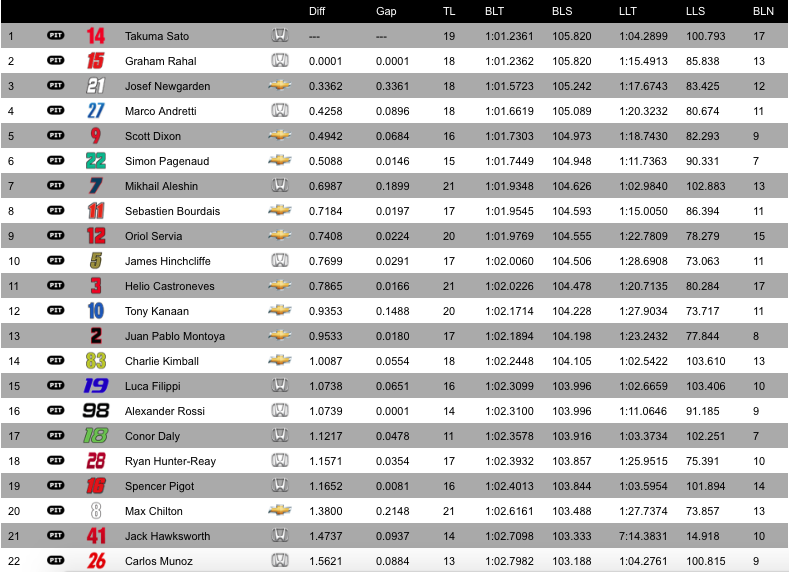