ST. PETERSBURG, Fla. – The Verizon IndyCar Series opens its 2016 season with a number of interesting story lines, with the most interesting one actually developing Sunday morning regarding Will Power’s status.

Will Power set another track record and scored his sixth pole position at St. Petersburg in the last seven years. Yet he will not be able to start due to nausea diagnosed during the weekend.

Oriol Servia filled in in the No. 12 Verizon Team Penske Chevrolet in warmup and was brought in on standby for the race, and just got confirmed.

Since he starts, he has experience in these type last-minute situations before. In one of his most memorable drives, he went from 14th on the grid up to second driving for Gerry Forsythe’s team in an injury fill-in role for Paul Tracy at the 2007 Champ Car World Series race at Long Beach.

Arguably the surprise of a weekend from a pace standpoint has been A.J. Foyt Enterprises, which has clicked with both Takuma Sato and Jack Hawksworth in the Nos. 14 and 41 ABC Supply Co. Hondas. Both drivers traditionally overachieve at the circuit and look for solid top-fives or so here.

HINCH, MIKHAIL AND THE ROOKIES

This is a three-stop race with roughly 17 or 18 laps of a window per pit stop cycle. The window opens as early as Lap 14 and runs through Lap 31 for the first cycle.

Honda tended to have an edge on Chevrolet on fuel mileage throughout 2015 and it will be interesting to see whether Chevrolet has closed the gap this season.

The race can’t be won on the opening lap but it certainly can be lost that way. Both Turns 1 and 4 are trouble spots, with Turn 1 serving as the more traditional problem child. 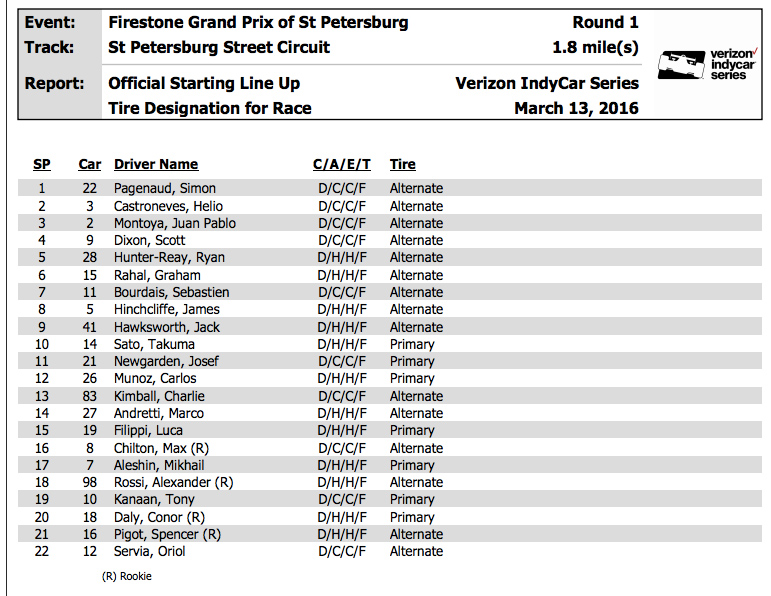