A slightly modified course redesign and a shift of pit lane from the inside of the circuit to the outside of the Exhibition Place circuit headline an announcement today from the Honda Indy Toronto, which celebrates its 30-year anniversary this year.

The changes owe primarily to hotel construction on the infield portion; however, the Verizon IndyCar Series paddock is still inside of the circuit where it has been.

Per an event spokesperson, there will be a cut at the Turn 11 exit to allow for access with tuggers, as IndyCar retains its infield location for car and engine preparation.

The race resumes in its traditional mid-July date this year, on July 17, after a one-year switch to mid-June to accommodate the Pan Am Games.

The full release details are below, also including a ticket promotion for an event, as are the year-on-year track map and grounds changes: 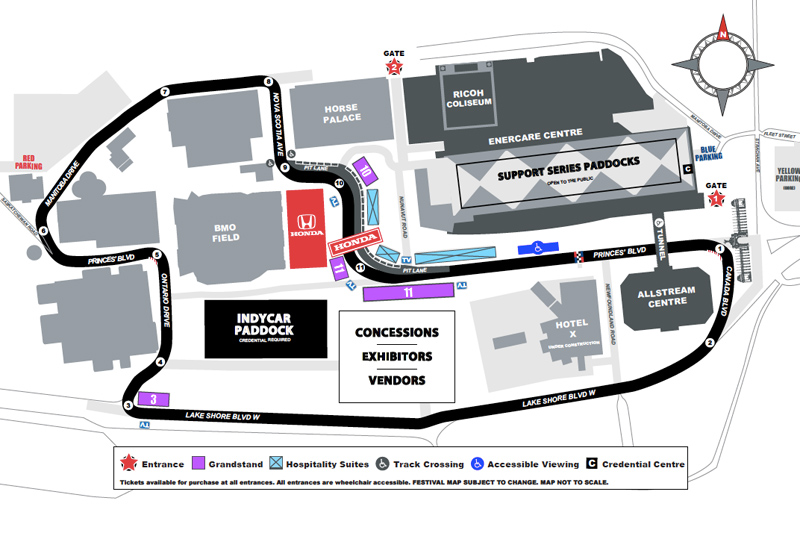 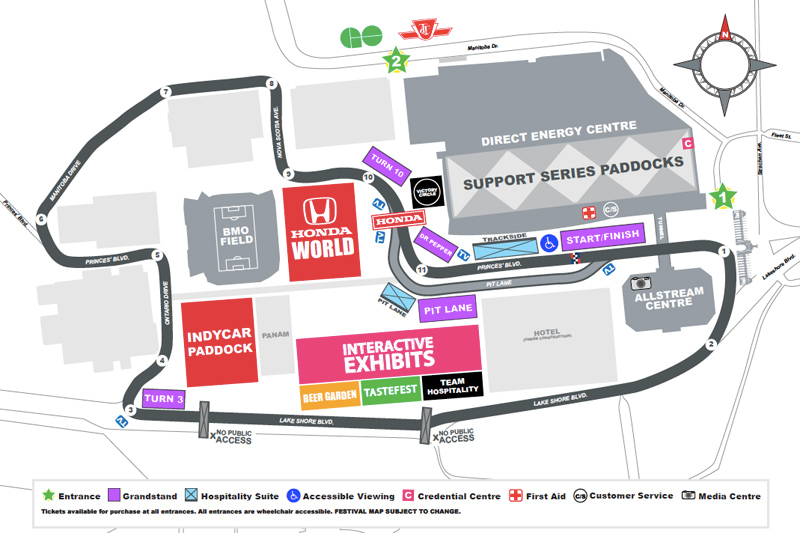 The ticket sales season for the 30th year of INDYCAR racing on the streets of Toronto is now open, beginning with an exclusive renewal period for fans who purchased weekend grandstand tickets in 2015. Renewal customers will have access to a new program, the Champions Club, offering many exciting benefits, including Paddock Passes, access to the Verizon IndyCar Series pre-race grid walk and an opportunity to sign the start/finish line for the 2016 Honda Indy Toronto. Ticket sales for the general public will begin April 12.

The ticket launch coincides with the introduction of a modified track design – the first since 1996 and third since the inaugural race in 1986 – that accommodates Hotel X Toronto, newly constructed on the historic grounds of Exhibition Place, just inside the Princes’ Gates and opposite the Enercare Centre (previously known as the Direct Energy Centre). The new configuration features the relocation of hospitality suites, grandstands and famous pit lane.

“This year marks the 30th year of racing in Toronto,” said Jeff Atkinson, president of the Honda Indy Toronto. “We are thrilled to be able to provide a double feature to help mark the occasion, with the NASCAR Pinty’s Series headlining on Saturday and the Verizon IndyCar Series on Sunday. Fans are in for an exciting weekend of racing at the Honda Indy Toronto this summer.”

Pit lane will move to the north side of the track, starting at Turn 9 and extending back onto Princes’ Boulevard past Turn 11. The popular hospitality suites will also move to the north side. Both were previously located on the south side of Princes’ Boulevard. The Turn 11 grandstands will be located on the south side of pit lane and a new pedestrian and wheelchair track crossing has been added at Turn 9.