The young Californian also nabbed the pole for the season opener on the streets of St. Petersburg, which was his first career pole position. He was also the only driver to score podiums in both St. Petersburg races.

Kaiser, in the Intervision-backed entry, set a two-lap average of 167.872 mph, a new track record, at the 1.022-mile Phoenix International Raceway.

He went out fourth and noted it was important to go out when he did, because the sun got worse as the session progressed. He sweated it out but hung on despite the nerve-wracking wait.

Ed Jones, in the No. 11 Carlin entry, starts second ahead of Pro Mazda Championship Presented by Cooper Tires champion Santiago Urrutia in the No. 55 Schmidt Peterson Motorsports car.

Jones had arguably the moment of the day with this save, as tweeted out by NBCSN Indy Lights analyst Anders Krohn below:

RC Enerson, who led the Indy Lights test at Phoenix in February, starts fourth ahead of Felix Serralles, one of the two St. Petersburg race winners.

St. Pete race two winner Felix Rosenqvist qualified 13th for his oval debut. Belardi Auto Racing teammate Zach Veach didn’t get to qualify following an accident in second practice, but will start from the rear of the 16-car field tomorrow.

A look at what happened today. Cut and blew a tire on track debris. Starting 16th tomorrow, ready to go! pic.twitter.com/d5zle9Yv2m 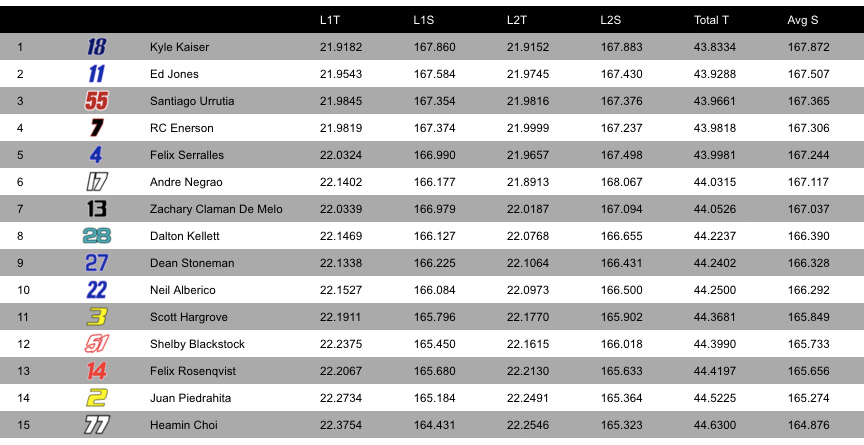