AVONDALE, Ariz. – Scott Dixon took the lead before the halfway mark and proceeded to pace the remainder of the Verizon IndyCar Series’ return to Phoenix International Raceway, en route to his first win of the 2016 season in the Desert Diamond West Valley Phoenix Grand Prix.

After a late yellow flag for debris from a puncture that took out Alexander Rossi after a strong oval debut, it meant the 250-lap race ended under yellow.

Dixon controlled the race after two early issues for Helio Castroneves and Juan Pablo Montoya in the No. 9 Target Chip Ganassi Racing Chevrolet, en route to his 39th career victory.

Dixon was put in position by his team, who got him up to second from sixth on the grid with a series of good pit stops, and then took the lead on Lap 96 – he never relinquished it for the rest of the day.

“It was tough. It was definitely one of the toughest races on these short ovals,” Dixon said. “I definitely think we can make some adjustments to get some more side-by-side stuff going on.

“But right now, I’m just so happy for the team. Team Target did an amazing job. It’s fantastic to have the lightning bulb back on the car. It’s the first win for this team at Phoenix. Chevy did an amazing job. But I can’t give enough credit to the crew. They did the best they could and I just tried to keep it on the track.”

Simon Pagenaud and Will Power were second and third for Team Penske, with a flying Tony Kanaan up to fourth. Pagenaud’s now into the points lead with 83 points, ahead of Dixon on 79 points and Montoya on 74.

Pagenaud came close to Dixon but was unable to pass him; as of Lap 245, he was 0.5 of a second back.

Kanaan fought back from a strategic misfire early in the race to get up to fourth. In the last 30 laps in particular, Kanaan was flying to come from five seconds or so back to within a second of the lead, but stalled out.

Graham Rahal completed the top five in a needed result for him after starting 19th, courtesy, primarily, of some outstanding pit work from the Rahal Letterman Lanigan Racing team. He was the top Honda finisher in the race.

Montoya, Ryan Hunter-Reay and Castroneves were an unrepresentative ninth to 11th after being the starring figures throughout the race other than the winner.

Both Montoya and Castroneves lost right front tires to cause unscheduled pit stops, while Hunter-Reay – who made a number of daring passes in his No. 28 DHL Honda for Andretti Autosport – was caught out twice by untimely yellow flags. He recovered from the first, but not the second.

Josef Newgarden was sixth, Max Chilton an impressive seventh in his IndyCar oval debut and Sebastien Bourdais in eighth after a roller coaster day of his own.

Rossi, who ran in the top five to seven most of the race along with Chilton, ended in 14th – with debris following a slow puncture halting his charge and placing the race under a caution finish. 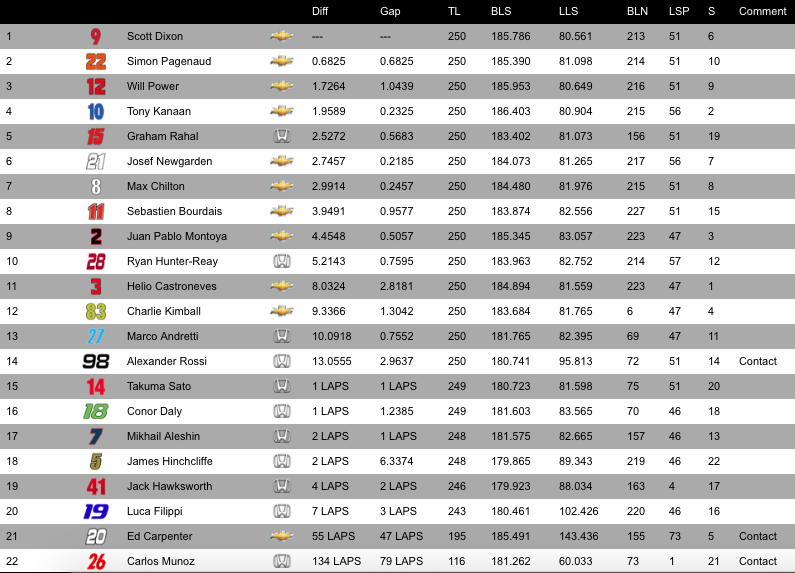