Even though he hasn’t done that yet, moving into the Verizon IndyCar Series points lead isn’t a bad item to check off.

The 31-year-old Frenchman, in his fifth full season since returning to IndyCar full-time in 2012 (Pagenaud also raced Champ Car in 2007 and a partial IndyCar slate in 2011), now has the series points lead for the first time in his career after finishing second in Saturday night’s Desert Diamond West Valley Phoenix Grand Prix.

Pagenaud swapped his green, black and white No. 22 Hewlett Packard Enterprise Chevrolet for an orange-and-white DeVilbiss-backed entry, and rolled out a similarly bright orange firesuit to go along with it this weekend. He also had his parents in town from France.

But even though the livery was the IndyCar equivalent of a “Dreamsicle,” Pagenaud can go to sleep at night knowing the points lead isn’t a dream.

He’s the only driver in the first two IndyCar races to have finished on the podium twice; Juan Pablo Montoya and Scott Dixon have a win apiece, with Ryan Hunter-Reay and Will Power the two third-place finishers.

For reference, Pagenaud only had two podiums all of 2015 – third places in Detroit race one and Mid-Ohio – so he’s already equaled that with better results this year, as it’s obvious the No. 22 Team Penske team is gelling better.

“That’s great. It’s according to plan,” Pagenaud said in the post-race press conference. “Everything that didn’t go well last year is going well now, so again, today is definitely — I had a lot of help from my guys, but I also had a great race car thanks to the team, and yeah, so you know, we’ve just got to keep doing exactly that. It’s great to see Will back and great to see he’s also healthy, and to be able to put it all together is cool.”

The face you make when a 2nd place finish feels like a win. Great night at @PhoenixRaceway! #IndyCar pic.twitter.com/vvVEioQMhw

French people know what to do with champagne on an #INDYCAR podium! 🍾😊 #DDCPhoenixGrandPrix pic.twitter.com/p7f67WJRAF

Pagenaud's parents decided to come over for a race. Looks like they chose a good one! Congrats to the Frenchman. pic.twitter.com/eJJHa6K9wp

Beyond the top three, here’s other notes after Phoenix from a points standpoint:

Via INDYCAR, here are the points, below, after Phoenix: 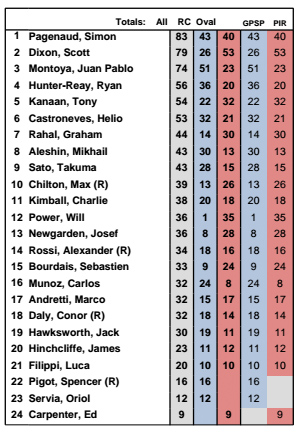