If Erica Enders had gone one more race like she had in the first three of the 2016 NHRA season, it would not have been a surprise if Elite Motorsports would have printed up some posters:

Even though Enders never actually was missing, her game was, to the point that some may have wondered if whoever was behind the wheel may be an imposter of the real thing.

Enders uncharacteristically lost in the first round of each of the first three races on the NHRA national event schedule.

When fans looked at the Pro Stock point standings, her name was nowhere to be found in the top 10. 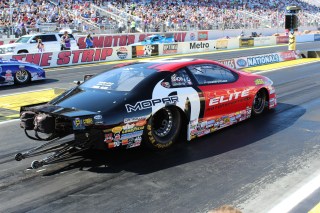 In effect, Enders couldn’t have gotten off to a worst start.

But then came this past weekend’s race at Las Vegas, and with it came the old Enders, the same driver who dominated the last two seasons en route to the championship.

As if waking up from a long winter’s slumber, Enders roared to life and took her Elite Motorsports/Mopar Dodge all the way to a semifinal finish in Sunday’s final eliminations of the Denso Spark Plus Nationals NHRA Nationals at The Strip at Las Vegas Motor Speedway.

The first sentence in Enders’ post-race media release said it all: “That’s more like it.”

“You find out what real champions are made of when you have to go through a little bit of adversity,” Enders said. “It makes you dig deeper and want it more.

“I don’t know we could possibly want it more than we already do, but my guys are amazing.”

To break through the first round elimination wall, Enders went back to the basics and what took her to the last two Pro Stock championships.

Now, it’s a matter of building upon what happened in Las Vegas and going from there for Enders, who climbed to ninth in the standings. By comparison, she was never lower than seventh in the Pro Stock points in her two championship seasons in 2014 and 2015.

She knows she has a ways to go, but if anyone can do it, Enders can.

“It was really nice to go rounds,” she said. “It felt like it was back to normal. We’re used to going deep into the race on Sunday, and we’re going to get back there.

“We just need a little bit more time. We certainly made strides in the right direction with our engine development program. We have work to do, but a semifinal appearance in Las Vegas was definitely awesome.”

Part of Enders’ slow start could be due to the fact that her team switched from Chevrolet power, which took her to the last two titles, to Dodge power for 2016. And in so doing, it’s not unusual in any form of motorsport to get off to a slow start when switching from one engine or manufacturer to another. 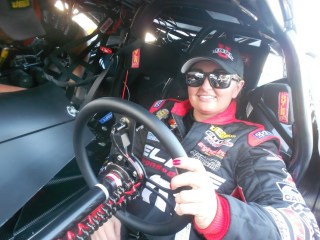 But the Las Vegas showing is a very promising sign that bigger and better things are coming going forward.

Coming into this past weekend, Enders had won the last four Pro Stock final rounds at Las Vegas.

After qualifying a season-best fifth, she roared past first round foe Aaron Strong and teammate Drew Skillman in the second round before dropping to eventual event winner Jason Line in the third/semifinal round.

“We did a lot better than we expected to today,” said Enders, who is now 18-1 in round wins in national events at Las Vegas with her Elite Motorsports team. “It was a good day, a good points day.

“We’ve got to get back to the shop, fix these awesome Hemis and go to Charlotte (the next race on the schedule) renewed, refreshed and ready to win a race.

“We’re not at the top of the pack, but we’ll keep making strides in the right direction and we’ll get better. It’s just a matter of time until we’re back to our winning ways.”