As the Verizon IndyCar Series tested new aerodynamic components Wednesday at the Indianapolis Motor Speedway in advance of this May’s 100th Indianapolis 500 presented by PennGrade Motor Oil, speeds weren’t as important as comfort level with the new components.

Between the domed skids and rear wing beam flaps, devices have been installed on the chassis fielded by both Chevrolet and Honda to try to keep the cars more on the ground to avoid an encore of last year’s week of practice, where three cars had airborne accidents.

For what it was worth, Marco Andretti and Ryan Hunter-Reay led the combined timesheets during today’s test, but whether that’s an actual gauge of anything beyond a comfort level today only on a sunny but blustery day at the Speedway remains to be seen.

Andretti certainly didn’t, judging by his immediate reaction on Twitter:

Lest Andretti be the only one to make a sandbag remark, so too did Simon Pagenaud’s engineer Ben Bretzman – Pagenaud drives a Chevrolet.

Made it home from Indy. Surprised the plane was that quick carrying all that sand!

With various downforce configurations and a mix of both qualifying and race runs, speeds are just what they were for the day.

“We ran through quite a bit of different combinations as part of the aero kit configuration test,” Bill Pappas, INDYCAR vice president of competition, race engineering, said in a release. “The conditions weren’t ideal, but we did get a lot of information to go over and look through over the next couple of days to get ready for the month of May.”

Notable elsewhere was the return of James Hinchcliffe to IMS after his accident in practice last year. The Canadian clocked 46 laps in his first large oval running at IMS, after also running the short oval at Phoenix last week.

“The good news is we all seem to be working toward the same thing,” Hinchcliffe, driver of the No. 5 Honda, said. “We are all genuinely trying to make a safer car but a car that still races well. I think there is a way to appease both sides of that argument.”

The 15 cars that tested completed just over 500 laps on the 2.5-mile oval. Despite being listed to test, neither Mikhail Aleshin nor Jack Hawksworth did. Sebastien Bourdais and Conor Daly saw their teams bow out for different reasons, as noted earlier today. 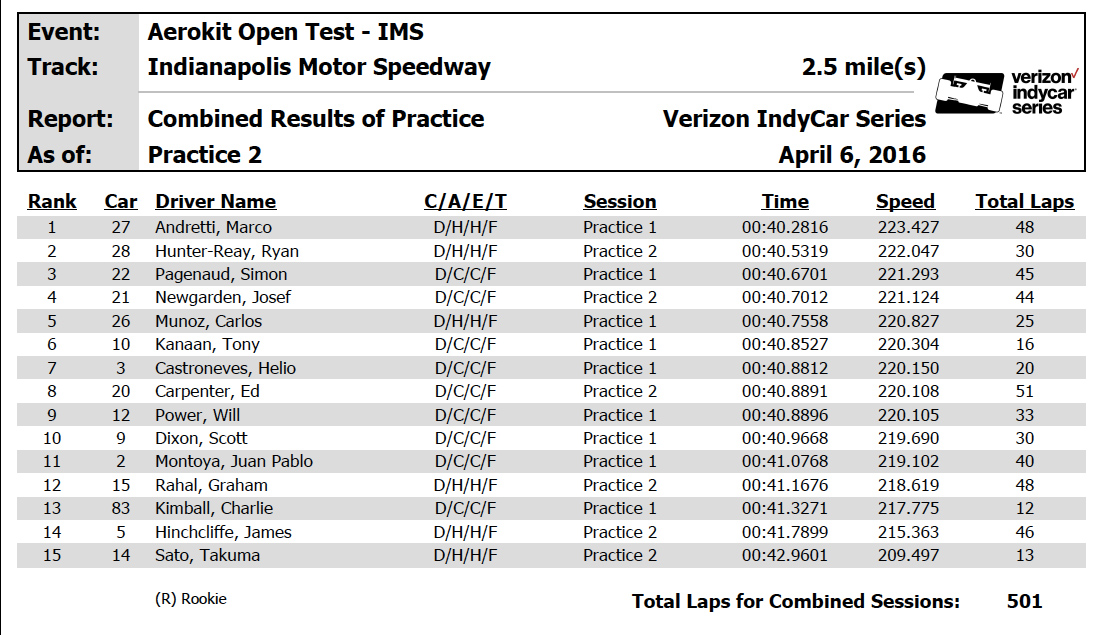